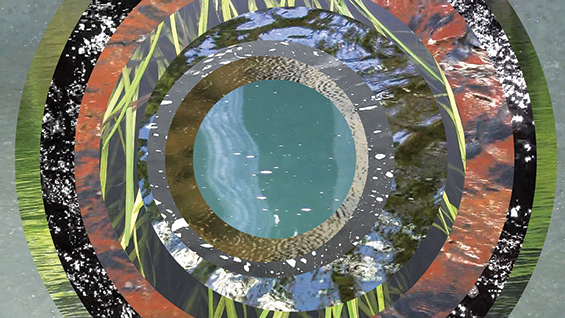 It was back in Glasgow, Kentucky when Arlington’s own
David Carlson first became interested in art on a serious level; learning from his high school teacher, Karl Weiss.

“Weiss used to shake his head at my ideas which only encouraged me to play more,” he says. “I felt it was important to be good at rendering, but in the long run I knew the way I put together ideas is what interested me.”

When it was time to go to college, his parents encouraged him to go to a state school, since he would be studying art, so he began his studies at Murray State University.

“My Grandma Johnson really provided stimulating discussions about being an artist,” he says. “She treated me as an equal, and that has encouraged me ever since. I am grateful to her for that.”

Although he started in abstract work, he later found a calling in digital media art. The digital video came out of a collaborative idea to produce work for the Dakart Bienale in Senegal back in 2000.

“Originally there were three visual artists, a performance and sound artist. We began the work with just the idea of video, which now, looking back was pretty crazy because none of us had a clue of how to make video, let alone work with the computer,” he says. “During that time, I was able to take digital classes with the Corcoran which helped me tremendously.”

To date, he’s created 13 pieces of video art. Carlson was attracted to both abstraction and digital media for very different reasons.

“Abstract painting has grown out of many years of working, defining, redefining, changing, understanding and approach,” he says. “I actually, like most artists, started out making representational works. Adding new ideas to that began changing the meaning and approach. Through many years of digging I finally arrived at abstraction, which has proven the best way for me to work with ideas that lie below the tangible. This gives me great freedom to approach my work that is directly defined in the painting themselves.”

As for digital media, the artist explains it’s a way to ask completely different sets of questions from a whole different perimeter.

“While the painting is much more internal, the digital video is more external dialogue working with the camera to gather footage and source material for the piece,” he says. “I isolate the figure or environment using it directly to create new questions of space, time and relationships between the object (video) and the audience. My concepts in the digital works are different but the process is very much the same as the abstract painting.” 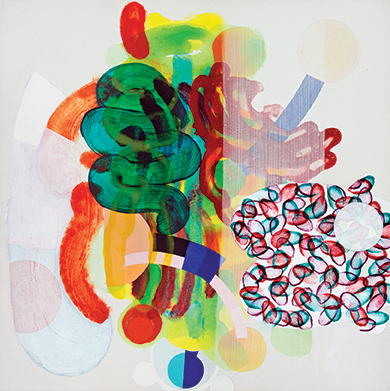 Today, the 58-year-old teaches at MPA and Marymount and has exhibited all over Virginia and Washington, D.C. His Digital Videos series has shown in venues in Senegal, Egypt, South Africa, Belgium, Turkey, Illinois and Texas.

When talking about art that has truly inspired him, Carlson has to go back nearly 40,000 years to the very first artists, when you would strip away content in art.

“I have thought about my personal philosophy over the years and what interests me most is the original creative act that took place during the Paleolithic period,” he says. “That simple act of making an image or object was a huge shift in consciousness. There has been much conjecture about reason, but I prefer to contemplate the straight representation of something, not so much why, but who.”

On a more personal level, he says, his philosophy is more of a question: “What is the nature of reality?

“This is my constant thought while I work. The tension between opposing paradigms of structure and change continually challenge me to look for different ways to understand this question,” he says. “I have a natural curiosity that fuels me, followed closely by the process or search for meaning in something. The question always comes up, ‘what if I do this?’ I like the challenge of the tension between the intuitive and the known and art fills that nicely.”

In April, Carlson will be exhibiting a new video installation as part of the McLean Project for the Arts, which will show in the MPA Emerson Gallery at the McLean Community Center.

“I have been speaking with Nancy Sausser, the curator for the McLean Project for the Arts, about video projection for sometime. I think my latest body of work finally struck a chord that really made sense for this exhibition to happen,” he says. “The upcoming show titled, ‘Water Unspoken,’ will consist of three projected high definition videos, one digital piece along with a video presented on a monitor, which will be very dramatic, lovely and visually enticing.”

Carlson feels NOVA has an amazing amount of artists of all caliber, and that locally, the art community revolves around powerhouse nonprofit spaces including McLean Project for the Arts, Arlington Arts Center, Workhouse Arts Center and the Torpedo Factory.

“What I appreciate in being involved for over 30 years with MPA and AAC is the sense of stability and opportunity for growth provided by these forward thinking groups,” he says.

Carlson is also involved in an on-going project entitled, “Take Me to the River,” which is an international collaborative group of artists.

“They have had a major impact on my creative life and from a human perspective as well,” he says. “We created TMTTR as a bridge between people of different cultures using art as a voice and creative tool to share and exchange ideas. Our scope has encompassed exhibitions and outreach projects in Egypt, South Africa, France, Turkey, Uruguay and the United States.”

Looking ahead, Carlson will also take part in a two-person show, “Fields,” at the Athenaeum in Alexandria, will be taking a trip to Kyoto, Japan, and is working on a project with TMTTR in New Orleans, La.

“As for the future I look to broaden my exhibitions to include museums, university galleries and new private galleries,” he says. “Also there are some collaborations with international artists that prove to be quite interesting.”