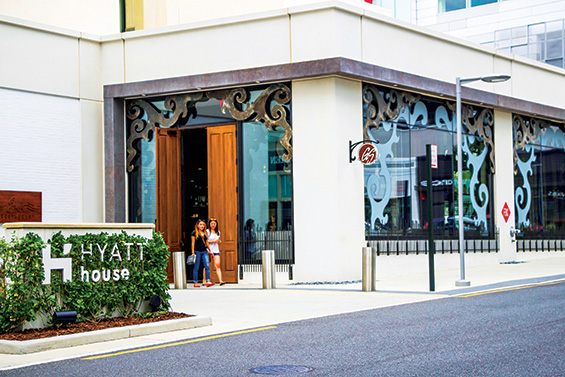 Helping to steer the movement is Chef RJ Cooper, who opened his second restaurant in the area in the vibrant Mosaic District. Gypsy Soul is a hybrid restaurant—a combination of modern décor and classic American cooking. I use the term loosely, because the menu features Cooper’s distinctive interpretation, or as Cooper calls them, “fall-to-the-wall updated takes on American classics.

Cooper’s impressive pedigree includes winning the StarChef award in 2007, and the James Beard Award in 2008 for his work at Vidalia, Washington’s popular Southern-influenced fine dining restaurant.  A native of Detroit, Cooper opened his own DC restaurant in 2012, called Rogue 24, where his multi course tasting menus received acclaim, partly because guests enjoyed scrutinizing the cooks’ unconventional techniques in the restaurant’s open kitchen. Watching Rogue 24’s cooks is said to be better than any reality television show featuring food preparation, because the cooks often interact with diners while they’re at work.

Cooper, a charismatic personality who rides a Harley Davidson motorcycle to work, is comfortable in the spotlight. He is the star of Chefs of Anarchy, a web series that illuminates some of the country’s most innovative chefs and eateries, and he has been a chief battler on Iron Chef America.

At Cooper’s new restaurant, Gypsy Soul, you can order á la carte from a menu that offers a wide variety of dishes—from sharing plates and generous entrées, to decadent desserts. The drink menu has been getting a lot of buzz too. “Cheftender” Bryan Tetorakis has developed his own tasting menu featuring cocktails with
regional spirits and unusual ingredients like arugula.

Though not complimentary, guests should order the breadbasket at Gypsy Soul. It is equipped with focaccia, challah, flakey lard biscuits, and the world’s best cornbread, which is delightfully creamy as if the kitchen used creamed corn in the recipe.

The lunch menu has a fair number of side dishes that demonstrate Cooper’s mastery of fresh ingredients. The “heirloom grains and tubers” include a chewy farro that is elevated by smooth mascarpone cheese and salty, brined heirloom tomatoes. It is a flattering combination of textures and flavors. The tomatoey okra stew will win over the most skeptical okra dissenters, and the tangy vinegar and sweet onions in smothered greens overcome any bitterness that leafy vegetables often have.

There are more surprises in store. The Smoked Albacore Dip with lavash crackers tastes like fresh tuna had been charcoaled and blended smooth—this appetizer is easy to share and pairs perfectly with one of Tetorakis’ sublime libations. The Chicken Skin Cracklins with “snake oil and roof top honey” will remind you why crispy fried chicken is a national dish.

Two entrees that appear simple, but require a skill like Cooper’s to render so impeccably, are the grilled vegetables with risotto, and the short ribs with risotto. These are hearty, pleasing dishes that leave you warm and satiated. Another recipe, as rocked out as the 70’s music serenading the restaurant, is Cooper’s shrimp and grits with sinfully rich andouille gravy. Every bite was a slightly different combination of sweet corn, spicy sausage, pillowy shrimp, tangy onions, and buttery grits.

There are homemade condiments sitting on the bar—such as pickled peppers and preserved Meyer lemons—that help add complexity and authenticity. For dessert, Cooper is again inspired by popular Southern ingredients like bacon and bourbon,
but uses them in unconventional ways. A peach crisp with sour cream ice cream was
the epitome of seasonality, but since Cooper creates with seasonal ingredients,
desserts will likely change depending on the harvest at nearby farms. Expect the unexpected, though, like spruce or onion ice cream, and chocolate pudding with bananas and peanuts.

The restaurant currently serves brunch, lunch and dinner, and the open kitchen allows guests to watch the cooks in action. It’s an impressive sight to see and not unusual to find Chef Cooper in the mix. He’s a hands-on restaurateur with vital relationships with local farmers, and those relationships allow Gypsy Soul to remain well stocked in premier ingredients. To be sure he’s there, Cooper says look for his Harley parked out front.