Integrated Indoor/Outdoor Solution Perfect for Entertaining In Every Season

An indoor/outdoor solution that seamlessly integrates a mid-1960’s split level to its leafy half acre lot with pool has handily satisfied the dual entertainment requirements of a Falls Church couple keen on gourmet cooking and partying with friends and family.

The remodeling to the home of Dave and Amy Starr reconciles a regimen of space-planning, interior design and functional considerations that had materialized as the home aged, and the owner’s needs became more refined.

“Our 25 year old kitchen was too dark and cramped,” says Dave Starr, 60, who has occupied the house since the early 1990’s.  “Also, the outdoor kitchen adjacent to the pool had deteriorated to the point where we weren’t really using it.”

Among the more glaring problems:

In search of a more functional and aesthetically-pleasing environment, the Starrs turned to Sun Design Remodeling, the firm that had previously executed three large-scale improvements to their home starting with a redesigned front elevation ten years ago.

The Starrs next hired the firm to upgrade the home’s lower level and design and install a new adjoining staircase.

“We’ve followed a slow-but-steady whole house renovation course” Dave Starr says. “Sun Design has been consistently sensitive to our budget, and finds solutions my wife and I could not have discovered on our own. Since we knew this recent project would entail a lot of challenges, we were confident that the high-quality collaboration we had enjoyed earlier would continue and didn’t feel a need to talk to any other remodelers.”

Among the critical design issues, Starr wanted to better rationalize the kitchen’s tight footprint without adding-on; he also envisioned a more fluid relationship between the kitchen and poolside setting.

“The outdoor kitchen was not being used much,” Starr recalls. “Because my wife and I love cooking and entertaining, we wanted a plan that would fluidly interact with several rooms in the rear of the house.”

To keep the project on track, Sun Design tapped Erica Williams—one of their top lead designers—to direct the process.

“The primary goal was to create a stronger visual and physical connectivity between the house and grounds,” Williams observes. “This meant introducing an appreciably open plan in the rear of the house. The advantage of transitional style is that it employs textures, colors and design elements to help to highlight activity zones…reducing the need for gratuitous walls. This sharpens sightlines from room to room while preserving the fundamentals of what makes a quiet spot feel private.” 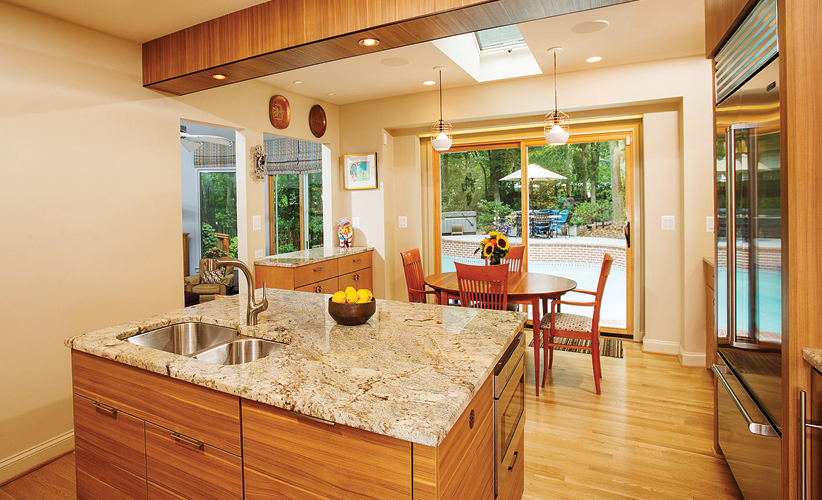 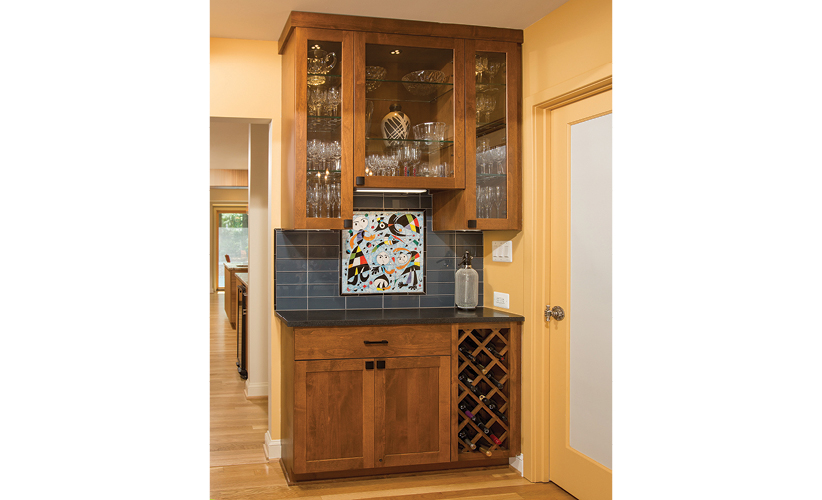 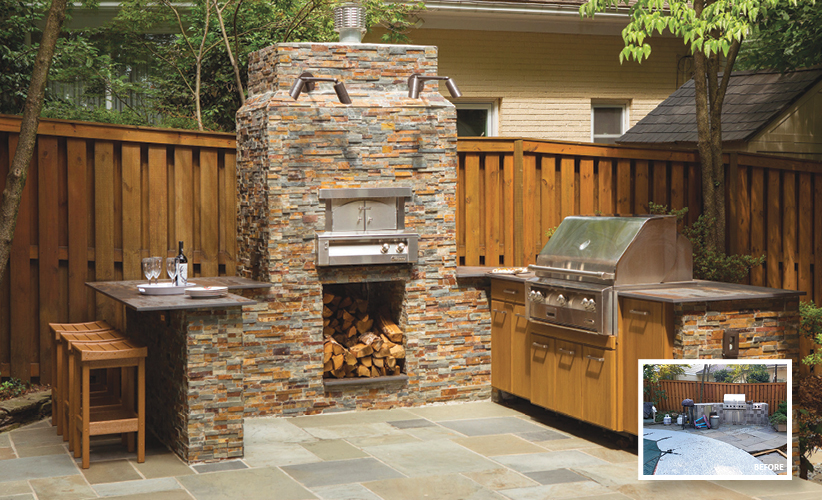 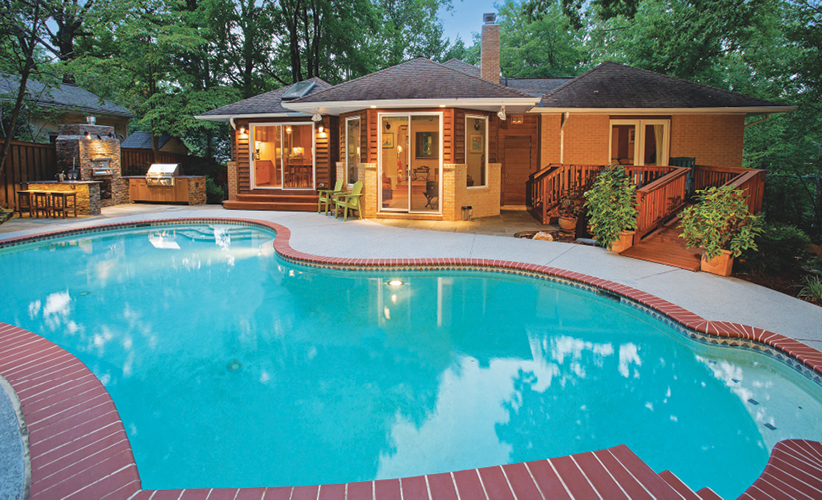 On this score, Williams’ plan called for relocating the kitchen sink on the home’s rear elevation and replacing a pair of small windows with a 8-foot wide sliding glass door that directly accesses the pool.

A 6′ x 4′ granite-topped food prep island equipped with sink, microwave drawer and dishwasher was introduced mid-kitchen; the custom built-in is integral to a new work triangle that brings the cooktop range and a 42” wide Sub-Zero refrigerator into close proximity.

Meanwhile, by rerouting HVAC ducting and deleting some bulkheads, Williams was able to replace existing 36” cabinetry with taller 42” units surfaced in natural maple.

The reconfigured kitchen floorplan allocates the space needed for a tea and coffee center a few feet from of the breakfast table.

Removing a refrigerator on the left side of the old kitchen sink, in turn, freed-up the wall space needed to form a “pass-thru” that now unifies the kitchen and the family room.

Eliminating a small mid-house closet, likewise, allowed Williams to introduce a dry bar which now functions as a serving station for the formal dining room. The built-in provides cabinetry for linens and stemware, and accommodates a wine refrigerator.

Outside, the plan called for a welcoming spot to barbecue and converse with guests. Situated on a flagstone platform, the new outdoor kitchen features a pizza oven, a gas grill and a three-stool dining counter.

The oven’s cladding is stacked stone veneer; counter surfaces are Dakton, a synthetic material designed for outdoor use.

Changes to the rear elevation have radically improved the accessibility of the outdoor cooking facility from the kitchen. Dave Starr says he is able to use the outdoor grill and oven most of the year—even in the winter.

The plan is especially useful for smoking meats, roasting vegetables and, particularly,  making pizza and other baked goods.

In all, a great place to spend quality time—in anticipation of an early Spring.

John Byrd has been writing about home improvement for 30 years. He can be reached @ 703/715-8006, www.HomeFrontsNews.com or  byrdmatx@gmail.com. Send photos of interesting remodeling projects to: b2b@homefrontsnews.com.