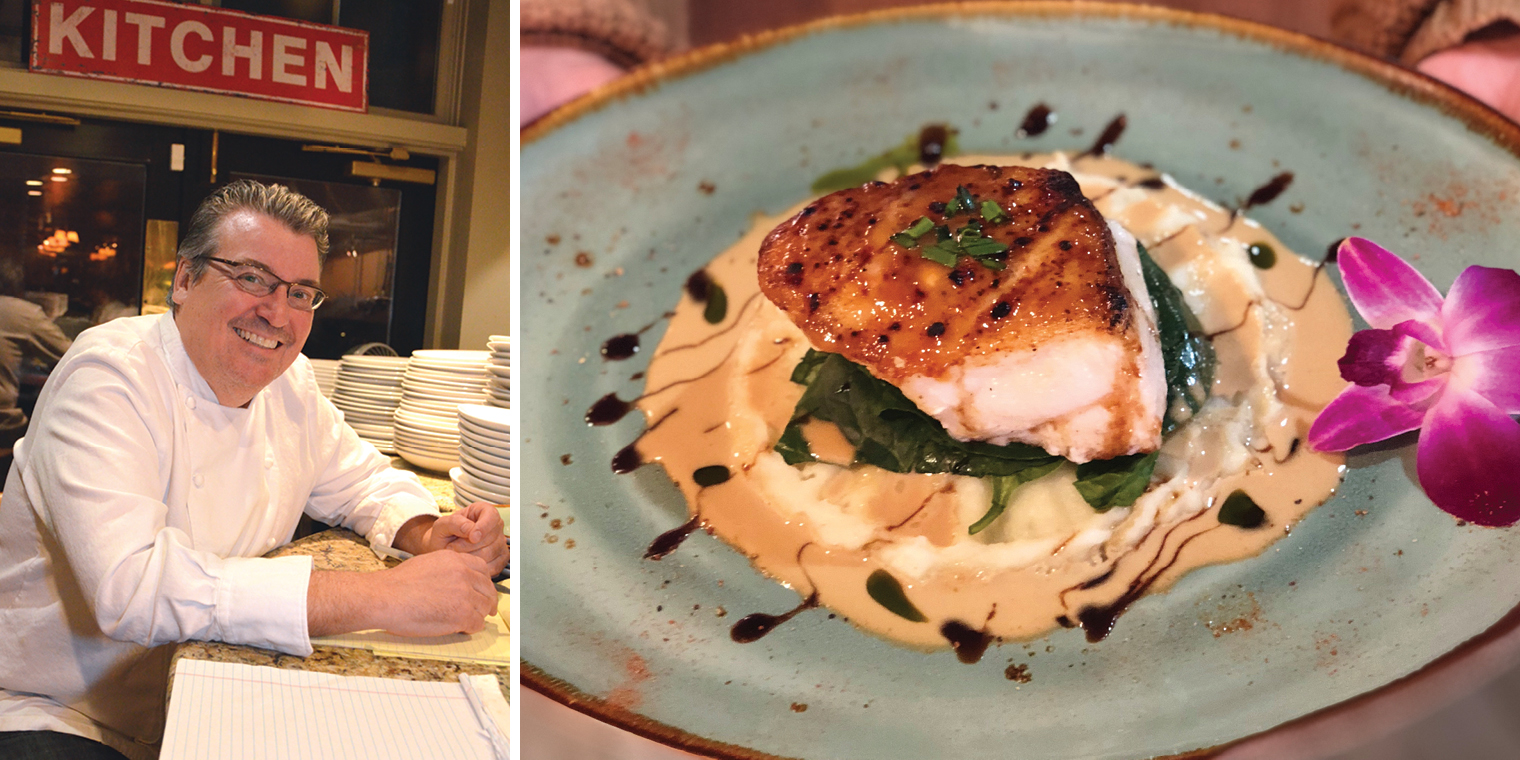 Bazin’s On Church has been a fixture on the restaurant scene for thirteen years, and it ranks as one of the neighborhood’s most beloved places to gather for special occasions and to meet friends at the restaurant’s lively bar. Patrick and Julie Bazin opened their Fairfax fine dining restaurant to rave reviews, winning best new restaurant in 2010 from Northern Virginia Magazine and serving a menu of American classics with signature flourishes and Instagram-worthy presentations.

Patrick Bazin has been cooking since he was sixteen, when he began his career in his family’s restaurant business. He moved to Washington D.C. to open the restaurant Red Sage and later became head chef at the Occidental. Eventually, he and his wife decided to debut their own restaurant in Fairfax County—Bazin’s on Church—on Church Street in Vienna, Virginia.

For years, Patrick had been swallowing antacids every day, while he dealt with a sometimes severely upset stomach. He didn’t investigate further until a colonoscopy eight years ago, which turned up a shocking diagnosis. The celebrated chef had Celiac Disease. 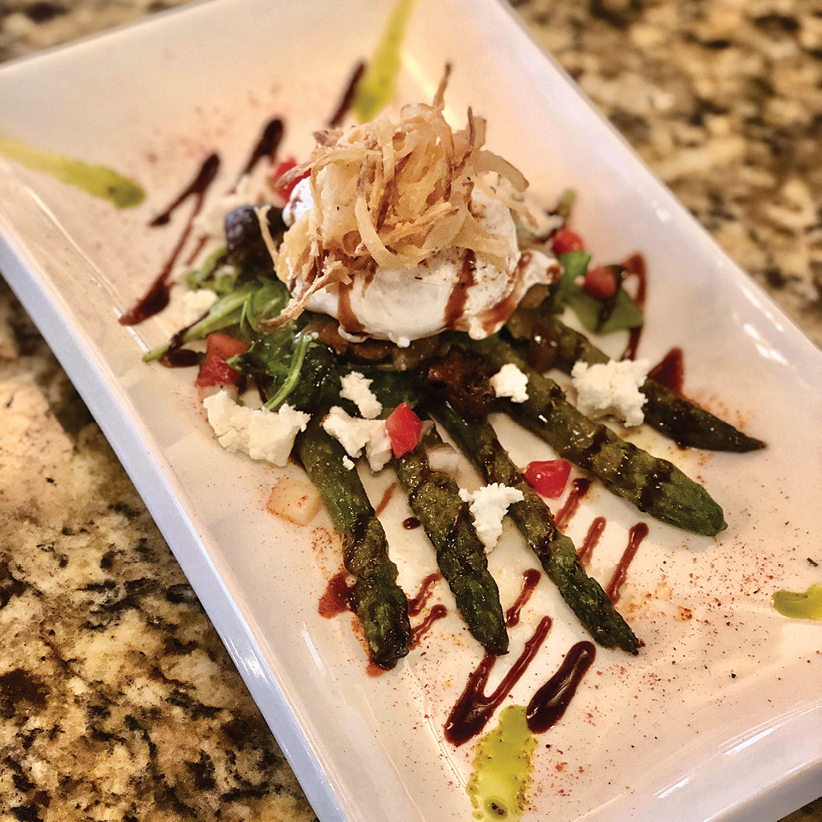 No one likes to give up foods like pizza, bread and pasta, but for Patrick’s long-term health, he needed to cut out all wheat, barley and oats from his diet. Celiac is a gluten-sensitive enteropathy, or an immune reaction to eating the protein found in wheat, barley and rye. Eating gluten products when you have Celiac affects the small intestine, making it impossible to gain the nutrients from those foods. It often causes bouts of diarrhea, fatigue, weight loss, bloating and anemia. In children, gluten allergies can affect growth and development. In adults with gluten sensitivities, they may experience rashes, mouth ulcers, headaches and loss of bone density.

Patrick took the situation very seriously and eliminated all gluten products from his diet. While he felt much better, he missed the sensation of crunchy, chewy and crispy he found in foods on his verboten list. “People with Celiac are dying for a crunch, so I started to experiment with different flours. Now I use rice flour, gluten-free panko crumbs, and pasta made with corn and gluten free breads,” Patrick explains. “My veal Parmesan holds up well with these new flours.”

Bazin’s on Church has a private dining venue next door to the restaurant where they host corporate events, wine dinners and theme nights. He purchased dedicated fryers and eliminates gluten contamination to host a monthly gluten free dinner in this elegant space. “For these monthly dinners, people with gluten allergies really gravitate to me,” says Patrick. “These people trust me because I have street cred. They believe in me since I’ve been gluten free myself for so long.”

In the meal, Patrick found ways to make spring rolls that are gluten free using rice flour. “It’s fantastic,” Patrick tells me. “It’s really good, crunchy and super crispy. I keep coming up with recipes using this flour.” He makes his signature dish, Broccoli Frito with rice flour batter and then fries it so it comes out with the texture of Tempura. “People usually don’t get to eat fried foods when they’re gluten free, because most fryers are cross contaminated with gluten products. We have a dedicated fryer for that.”

Bazin’s also hosts a Mexican dinner once a month, and most of those dishes are gluten free. “I’ve always gravitated to Mexican, and it was probably because they don’t have much gluten in their dishes, like mole, corn tortillas. I never got sick eating that. Bazin’s Mexican night has six appetizers and five entrees. Before we prepare the food, we scrub down the kitchen.”

Patrick has seen a positive response to these dinners, and he is moved by it. “People have been thanking me. They say, ‘No one else is doing this,’ and they come to me with smiles on their faces. They ask me to talk to their kids when they’re first diagnosed with Celiac. I would eventually like to teach these techniques so other people can do it at home,” says Patrick.

One big problem Patrick sees is that most kids aren’t learning to cook for themselves. They mostly eat at fast casual restaurants, which seldom offer gluten free options. “They’re forgetting what real food is. All that gluten is mixed in, so you can go out and eat, and then get really sick.”

This is especially true once you’ve eliminated gluten from your diet for a while; people become highly sensitive to gluten when it’s out of their diet. It’s a serious situation when it’s hidden in some foods. Patrick says he became extremely ill on his birthday, because he didn’t realize gluten was in something he ordered. “It scared my wife and kids to see me so sick,” he remembers. One of the most effective ways to avoid allergic reactions to gluten, like vomiting and diarrhea, is to learn to cook yourself. “I advise people to learn to cook to better understand their condition.” 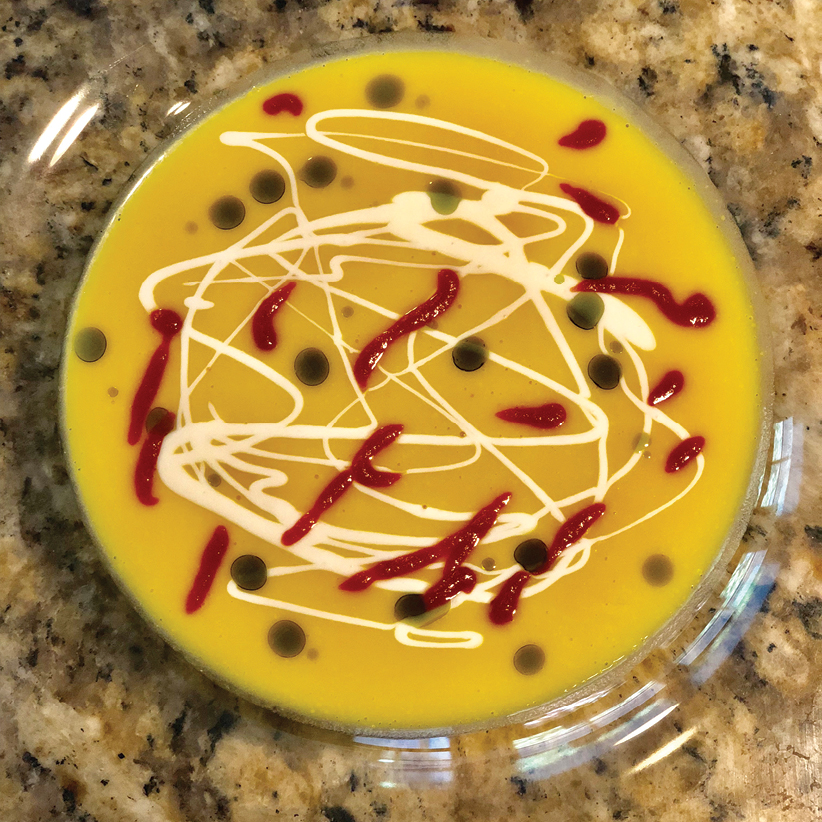 For Patrick’s Pop Up Nights, he’s busy cooking, but because it’s an open kitchen, many people come up to ask him what is safe to eat. “People ask me questions all the time. I tell them bone broth is really good for us. I make it with turkey, beef shank and chicken, then I add porcini mushrooms for that umami. I let it cook about 48 hours. You can do so much with it, like stew, soups and tea. I make this French Onion soup with brazed short ribs and Parmesan cheese. It has so much depth.”

Patrick says there are many new products available for people with a gluten allergy. “It used to be you got a piece of meat or fish on a salad, but now that the condition is mainstream enough that people are more aware of it than ever before. There are 40 million people with gluten intolerance, and if you eat gluten, it hurts your other organs.” One reason he thinks this sensitivity to gluten has become more common is the increasing amount of genetic modification in products we eat. People have a hard time digesting it, he believes.

Does life change a lot when you’ve cut gluten from your diet? The chef says he used to drink bold red wines, but now he has a taste for lighter vintages like Pinot Noir. As a trailblazer in the gluten-free arena, he’s taken on this challenge and is helping others who struggle to make changes in their diet. It’s important to meet with a nutritionist to help you make good choices. Researchers at Mayo Clinic report that only 20% of those with Celiac Disease get a definitive diagnosis. But once they do, it’s a lifelong commitment.

“The more you do it, the more you get used to it,” Patrick explains. “I want to teach people who don’t understand food as well as I do. They need help simplifying life. They can feel overwhelmed.” Patrick invites me to his next Gluten Free Dinner event so I can try the foods. “You’re going to love it,” he assures me.