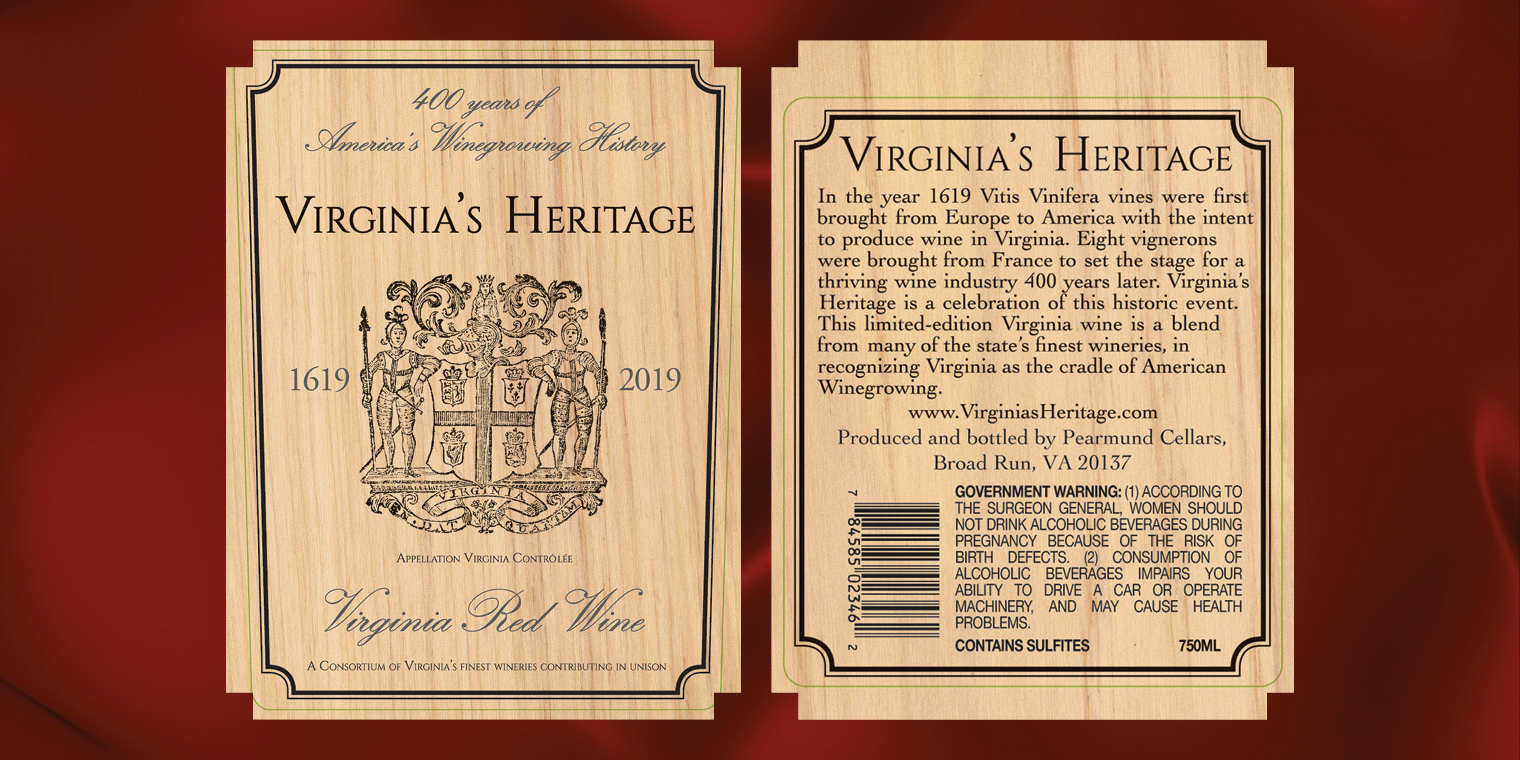 In 1619, the first grapevines were brought to America from Europe with the intent to produce wine in Virginia. Four hundred years later, Virginia celebrates with a 400th Anniversary Project called Virginia’s Heritage.

“The idea for Virginia’s Heritage was to bring more consumer awareness of Virginia’s wine history, which is basically the cradle of winemaking in the Americas,” Pearmund said.

Each participating winery provided a barrel of their best Bordeaux-style reds, and the Virginia’s Heritage wine was expertly blended from their contribution of Merlot, Cabernet Franc, Cabernet Sauvignon, and Petit Verdot wines. The result? A beautiful representation of Virginia’s finest.

The blend was aged in 32 wine barrels in the Effingham Manor winery, and bottled in August to produce 10,000 bottles, with the number of bottles representing each of the original 10,000 vitis vinifera vines planted in Virginia by the Virginia Company, 400 years ago.

The limited-edition wine is presented in a commemorative box featuring a representation of the 1619 Virginia Company seal to reflect its Colonial roots. The wine bottle label is printed on thin sheets of birch wood and ribbon shavings of the same wood surrounding the bottles as packaging.

The Virginia’s Heritage wine will make its debut in October and be available for sale through the participating wineries, at select wine retailers, and the Pearmund Cellars website.

Virginia’s Heritage: 400 Years in the Making 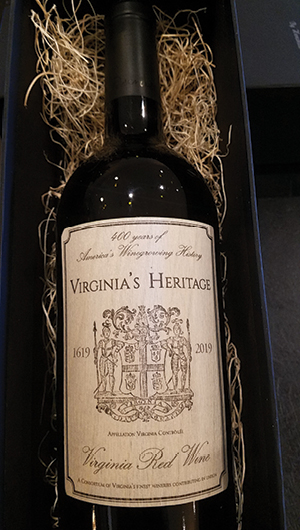 When the Virginia Company founded Jamestown in 1607 as the first permanent English settlement in North America, one of its objectives was to produce commodities such as wine, silk and oil to avoid having to import them from rivals Spain and France.

With hopes that Virginia would become a major source of wine for the British Empire, in 1619, the House of Burgesses (the predecessor of the Virginia General Assembly) enacted “Acte 12,” or the 12th Act of law, to require “every householder” to plant and maintain ten vines from those that King James I had sent over from Europe. Unfortunately, these vines failed to thrive among the approximately 1,000 households, and in 1619, a second 10,000 vines were sent from France by King James I. Every effort seemed to fail, and with cider, whiskey, beer and brandy being plentiful, the settlers eventually gave up.

Enter Thomas Jefferson and George Washington, who attempted to grow grapes on their estates in hopes of realizing the promise of Virginia wine. Jefferson tried twice to grow vitis vinifera vines imported from Europe. The first time his efforts were cut short by the Revolutionary War. The second time, the crop was blighted by phylloxera, an aphid native to North America that was deadly to the non-resistant European vines. Neither man was able to produce a single bottle.

As one of the most prominent families in Virginia, the Carter family became instrumental in Virginia’s wine production. Robert “King” Carter was purported to have a wine cellar at his Corotoman estate containing more than 900 bottles of imported wine. This must have sparked an interest in his son Charles Carter, and in 1759, Charles began growing grapes at the Cleve Plantation. By 1762, he is said to have planted 1,800 vines.

Charles Carter sent 12 bottles he produced from an American winter grape and a white Portuguese summer grape to the Royal Society for the Encouragement of Arts, Manufacture and Commerce in London, who pronounced the wines “as excellent wines.” They presented him with a gold medal. The next year, he was recognized by Royal Lieutenant Governor Francis Fauquier for being the first to successfully grow European vines in Virginia.

In the early 1800s, a man by the name of Dr. Daniel Norton began experimenting with crossbreeding native grapes, and discovered in his Richmond lab a vine well-suited for growing in Virginia’s soil. It became known as the Norton varietal, with characteristics of aroma and taste similar to those found in European grapes. At the 1873 Vienna World’s Fair, a Virginia Norton wine surprised everyone by being named “best red wine of all nations.” Another Norton won a gold medal at the 1889 Paris World’s Fair.

Fast forward to today to where Virginia has nearly 300 wineries and is sixth in wine production in the United States, behind California, Washington state, New York, Oregon and Texas, and a world-wide reputation for creating award-winning wines.

“In Virginia, we have many, many firsts,” Pearmund said. “We should be proud of, and lay claim to, the historical heritage of winemaking in the Americas. Our future is strong, with the passion and creativity of the people who take the Virginia wine industry seriously.” Virginia’s Heritage is merely a symbol and commemoration of that dedication passed down for centuries. Bazin’s on Church: A Touch of Magic in Vienna Dec 06, 2020 / Comments Off on The Tents of Tysons’ Cool New Culinary Scene: Clarity