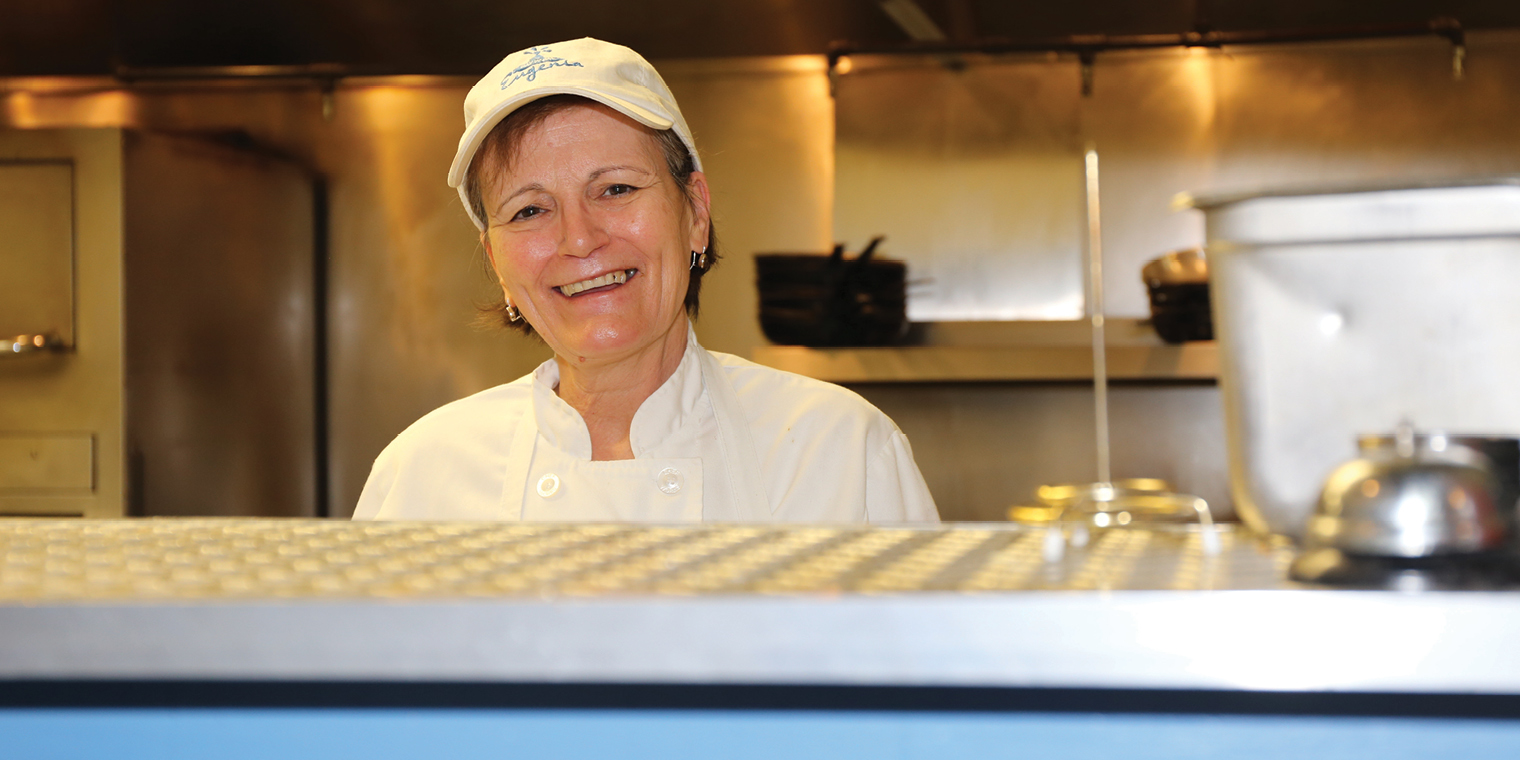 When I heard about Our Mom Eugenia, a one-year-old restaurant in Great Falls, I immediately invited my friend Evelyn Xeron to have lunch there. Evelyn is a serious home cook who travels to Greece every summer to visit family. I knew she would enjoy sampling this taste of her homeland, and her immediate reaction was positive. She said the modern Greek taverna is just the kind of place she and her family would look for when they’re traveling in Greece. Though this was a cold snap in January, I temporarily felt transported to a sun washed Greek island, if only for the afternoon.

Rustic, yet modern, Our Mom Eugenia is a casual neighborhood restaurant with wood paneling from a Virginia barn and whimsical paintings of Greek life adorning the walls. Several family style tables are available for groups, and you may hear a few diners speaking Greek around you.

We were greeted by one of the owners, Philip Hobson, who works in the front of the house. Philip and Alex Hobson are Chef Eugenia Hobson’s sons who opened this restaurant with their mother, and then named it in her honor. On this chilly day, the warm interactions make you feel like you’ve been invited into the Hobson family home. 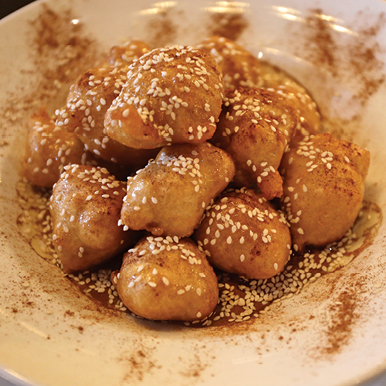 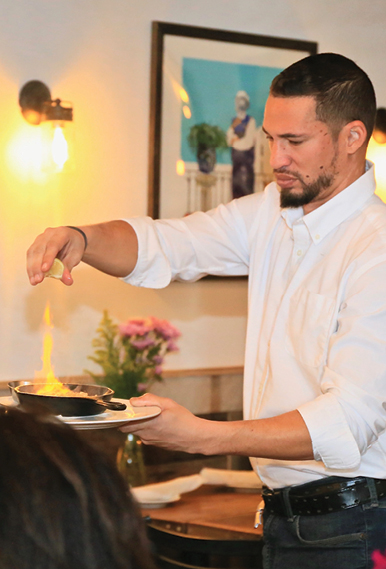 For a while now, Eugenia’s sons had been dreaming of owning a restaurant where their talented mom could showcase her inventive Greek cuisine. Eugenia attended an Athenian culinary school, but also gleaned her recipes from cooking with her mother and grandmother. When she moved to America, Eugenia became the chef at Mykonos Restaurant in Rockville, and then moved to Nostos Restaurant in Tysons.

“We had been looking for a place like this for a while,” says Alex Hobson who lives in the Great Falls neighborhood. They opened Our Mom Eugenia on December 6, 2016 and have enjoyed the support of enthusiastic regulars ever since.

Phil says his mother prepares dishes that are lighter than northern Greek staples like Moussaka, although the traditional dish is still on the menu here. “My mom is from an island in the Ionian Sea on the West Coast of Greece called Zakynthos. It’s south of Corfu and Cephalonia. Zakynthos has more vegetation and rain. My mom’s food doesn’t use a lot of oils or heavy stuff. She likes light cuisine,” says Phil. “If you go more to the north, the dishes are heavy, with a lot of meats and sauces, because of the weather. Further down south, the cuisine gets lighter and lighter. Down in the islands we eat a lot of fish.”

Fish dishes are often among the dinner specials, while lunch features daily options like lamb burgers and Cabbage & Carrot Salad. “She cooks a soup every day, and also a lunch special. At dinner, we offer more fish specials like sea bass or rockfish,” Phil explains. We were at the restaurant on Thursday, so we tried the lunch special called Gemista, which in Greek translates to “the ones that are filled.” The ones, in this case, were a duo of roasted green pepper and tomato filled with cinnamon-laced minced meat and rice. This healthful entree softly fills your mouth with its lightness. “It’s a favorite of the hair salon employees next door,” says Phil. “They order it every week.”

Chef Eugenia smiles from her window in the kitchen, as she watches the rapt reactions to a flaming appetizer called Saganaki—Kefalograviera cheese set ablaze in brandy. She has clearly mastered conventional Greek cookery but incorporates recipes that reflect the palates of her native island. Vegetarians, pescatarians, dairy free and gluten free folks will all find inspiring options here. 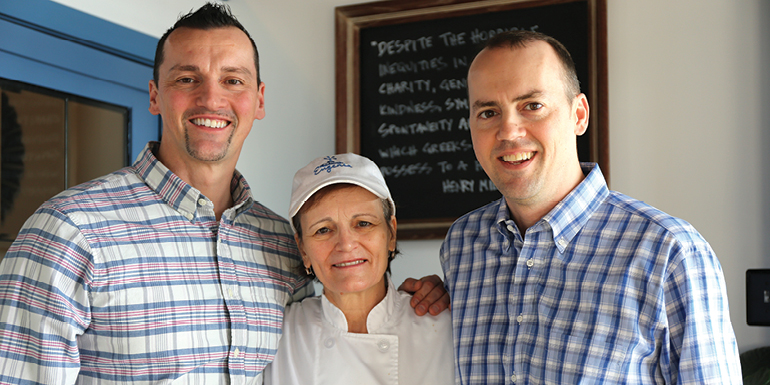 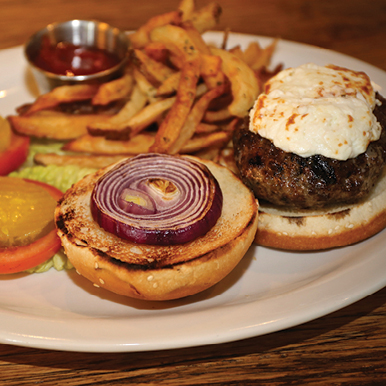 A carafe of luscious green olive oil sits on the table, intended for the restaurant’s crusty bread spotted with oregano. An assortment of appetizers includes customary Greek dips like Tzatziki, Melitzanosalata and Taramosalata, but with standouts like Feta Psiti—a crisp puffed pastry covered with sesame seeds wrapped around a wedge of gooey feta cheese. This pastry arrives on a bed of arugula, and is drizzled with golden honey. You could share it, but you won’t want to. Evelyn and I finish every bite, and she observes, “Greeks are starting to get more modern with their food. They’re going beyond the basics. I’ve never had anything like this. It reminds me of a Greek candy called Pasteli; it’s bar made with honey and sesame.” I think this captures Chef Eugenia’s signature style, taking beloved Greek ingredients and reimagining them in new ways.

An appetizer that’s ideal to share is the tart Patzaria & Pistachio Skordalia. Chef Eugenia has slowly baked the claret-colored beets that encircle Skordalia, a hand-whipped mash of garlic, potato and olive oil, then sprinkles it all with crushed pistachio nuts. This balance of textures and flavors is what modern gastronomies strive to achieve.

You will find a predictable Greek Salad with cucumbers, tomatoes, red onions bathed in vinegar and oil, and an Island Salad, that contains romaine lettuce. Both incorporate a hearty helping of feta cheese. Save room for dessert though, specifically consider the beignet-like Loukoumades, fried dough puffs bathed in honey and peppered with cinnamon and sesame. They are traditionally served for celebratory events, but you can have them any day at Our Mom Eugenia.

A steady flow of customers continues most of the afternoon, as the word’s gotten out by word of mouth and from food critics praising Our Mom Eugenia. “I would drive across the bridge for this,” says Evelyn as we prepare to leave—a high bar reached for any Maryland resident. This is a neighborhood restaurant for diners seeking a homey yet epicurean dining experience.

MyEyeDr. at Tysons The Boro