For the Love of Olive Oil 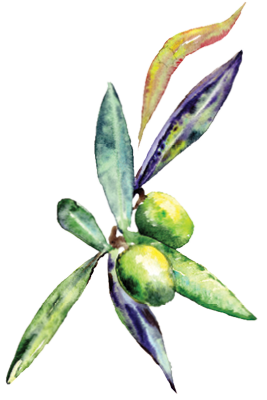 The whole idea was developed over dinner at Bazin’s on Church when three friends: Dr. Christopher Bonacci, a noted local oral and maxillofacial surgeon, a radiologist, and a beverage attorney were talking about their bucket lists and following those passions that would create a fulfilling life.

The conversation so inspired Bonacci that he continued it at home with his wife Kristin, and they began to discuss what they would do when retirement time came around. Their common passions, they discovered, were food, wine, and travel. So what could they do that would combine all those? Why not olive oil?

As serendipity would have it, at the same time, friends from Italy were visiting, and talked about how economically difficult things were in internal Italy, especially in the Umbria region. “They told me that people hadn’t seen such economically devastated conditions since WWII,” Bonacci said.

Bonacci and his wife created a limited liability company in 2015 he called Nonnie Importers, named for his grandmother whose family hailed from Trevi and Spoleto, small Umbrian hill towns. “What I didn’t realize at the time was that Trevi is considered to be the olive oil capital of Umbria. The finest olive oil comes from this town.”

Bonacci then arranged for himself and his wife to visit five diverse and most respected olive mills in Umbria, a central Italian region bordering Tuscany, during the November 2015 olive harvest. The pair toured the mills, tasted the oils, and learned much about olive oil. Bonacci recalls visiting “everything from mills that were very commercial, with olives sourced from 100 different farmers, to a bottling operation held in the garage of a house.” For generations, the local agrarian society has been cultivating and harvesting olive oil on the prime hillside real estate. Boanacci and his wife “discovered wonderful modern technology combined with the ancient aspects of these family-run operations that married the two quite nicely. And the oil they produced was extraordinary.”

Bonacci contracted with a mill on the spot to produce and private label 500 bottles of Bonacci Extra Virgin Olive Oil on very short notice, providing a label created as a result of an online contest and won by an Australian woman.

“American consumers are not educated to understand the nuances of good oil vs. not-good olive oil,” Bonacci explained. “I oversee the harvest in November, and that same day, the fruit is pressed and bottled. Then the bottles are FedX-ed air freight in a temperature-controlled environment to the U.S. That kind of quality control is absent from 90% of the oil sold in the U.S. where consumers have no idea where their oil comes from or how it has been handled or stored.”

Like fine wine, good olive oil is a result of the terroir, weather, trees, water content of the olive, soil, and the love of the farmers who prune and tend the trees throughout the growing season. All this is reflected in the product.

The Bonacci EVOO is a blended oil of three olive varieties grown in the region: 80% Morialo, 10% Leccino, and 10% Frantoio. “This is 100% Italian Trevi super premium olive oil.”

“In the short time we’ve been doing this, we have seen some interesting customers, like The Wine Advocate Robert Parker and Aaron Franklin, winner of the James Beard Award for his Austin, TX barbecue. Everyone who has tried it has nothing but wonderful things to say about it. It’s wonderful when you get sophisticated palates liking what you’re doing, and when people taste it, they comment, ‘Wow, I’ve never tasted oil quite like this.’ That is music to our ears.”

What Consumers Need to Know About Olive Oil

“The things that give olive oil its health benefits, like its antioxidant properties and polyphenols, begin breaking down as soon as the fruit is picked, and it is only good for about a year after the pick date. You won’t find a pick date on the label of olive oil you pick up off the shelf,” Bonacci cautioned.

Never expose this oil to heat; use it as a finishing oil for grilled meats like lamb, steak, pork or chicken, salads, cooked vegetables, and good bread. “Any place you use butter, substitute olive oil.”

Pull a bottle you have now, pour a tablespoon and smell it. Then put it in your mouth, swirl it around to oxygenate it, and swallow it. Do the same with the premium oil. You will notice the peppery spiciness. But as soon as you put the olive oil on food, the spiciness goes away, and you are left with a perfect complement to any dish.

Giving Back to Umbria

For his second harvest, Bonacci brought along good friend Patrick Bazin, owner of Bazin’s on Church. Bazin fell in love with Bonacci’s olive oil and now serves it in his restaurant—but only for his special dinners. It aligns with Bazin’s commitment to serving the highest-quality ingredients and the freshest foods.

“Patrick had this romantic notion that if money wasn’t an option, he would buy a vineyard in Napa and live happily ever after,” Bonacci said. “Once he visited Umbria, that dream shattered. In Italy, he encountered people who look you in the eye and greet you with a ‘buon giorno,’ and fell in love with the lifestyle. There, everyone has grapevines and olive trees and lives daily happy lives without the commercialization of California.”

Their visit occurred just following the devastating earthquakes that rocked that region. The two tried to see what they could do to help, but the highways and roads into the mountains were impassible. 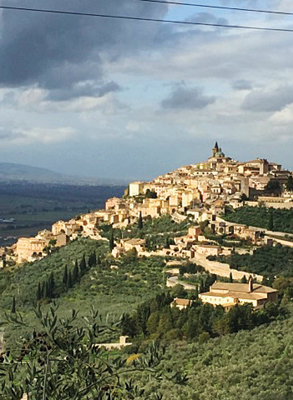 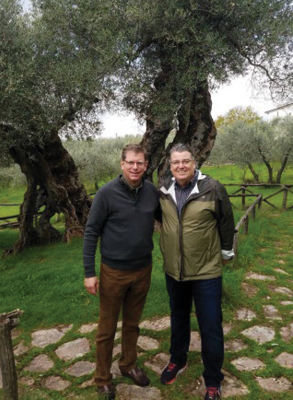 “As I got to know Umbria, we decided I didn’t want to just sell olive oil. I wanted to bring the most enthusiastic consumers to experience the olive oil-producing regions of Umbria,” Bonacci said.

This year, Bonacci returns with five guy friends for a “food immersion” to celebrate his 50th birthday. “One day we’ll have an olive oil adventure, another day we’ll go out with the dogs to find and eat black truffles, another we’ll experience wines, or drive Ferraris in the mountains, or spend the day hunting wild boar.”

He is already planning next year’s harvest tour, bringing along others to experience and infuse tourism dollars into the region. He also agrees to purchase the Italian oil at full retail price. Plus, by shipping it outside the European Union, the Italians are exempt from a 20% vat tax. 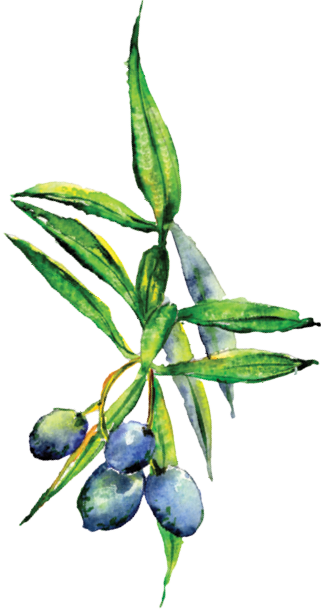 “The business is evolving, and bringing people to experience Umbria is part of giving back. The history of this region is very artistic; people paint or sculpt using techniques that have been handed down from generation to generation. People can buy their art, support the local community, and bring a little bit of Italy home with them.”

Last year, Bonacci doubled his order, importing 1000 bottles—more than one ton—of olive oil. This year he is forecasting 1,500 bottles. “So far, it has just been friends of friends who taste our oil and buy a bottle, and then come back for more the next year.”

Everything is pre-sold; there are no retail outlets for Bonacci Olive Oil at this time. Bonacci accepts orders in September and October for an early December delivery. Consumers can place their orders through Facebook or email at  nonnieimportersllc@gmail.com. Most people order a year’s supply, or about 10-12 bottles. Others order a full case or more. Sep 26, 2021 / Comments Off on Exploring the Architecture of Frank Lloyd Wright