Rajendra K.C. is a modest man who allows his brushes to deliver most of his expression. An outdoor or “plein air” watercolorist, he can be found at the Falls Church Farmers Market many Saturdays during the year or at many other locations around town. Wherever he paints, a crowd gathers to admire his craft.

Growing up in Nepal, Raj enjoyed playing in the beautiful Kathmandu Valley which he later chose to paint. The green valleys and the mountains were awe-inspiring – he says that “nature is the first art teacher.” In fact he says he is a self-taught artist with no academic art credentials.

As a high-schooler, Raj loved to paint but was unsure of his ability. After Raj graduated from high school, his younger brother entered a school contest, surreptitiously submitting one of Raj’s paintings as his own – and won first prize, 300 rupees! At that point Raj started to believe he might have some talent. He took a two-year course from Sirjana Contemporary Art Gallery in Kathmandu where he later exhibited a number of times. In fact Raj has been a part of numerous exhibitions around Nepal, India, Japan and beyond.

At 35, Raj and his new wife, Shanti, took their young family (daughter Sara, then 5, and son Sheraj, then 3) to America traveling on a diversity visa and arriving in Falls Church. His first priority was surviving in this new environment so he worked full-time but painted when he could for he truly “wanted to contribute to the art field.” Still somewhat insecure about his painting being accepted, he recalls painting quietly at Great Falls National Park hidden by the trees. Two couples discovered him and stayed for more than an hour, fascinated by his work. It was time to make his passion a career pursuit in this country. 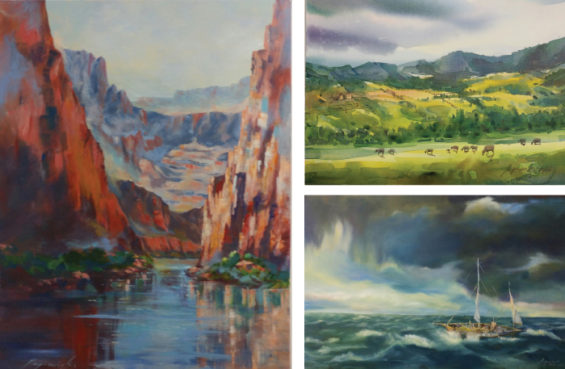 Taking the advice of Sally Cole, Falls Church Chamber Director, he sought out Falls Church Arts which he credits with launching his local success. “Thanks to Falls Church Arts, they provided a really good opportunity to present my work to the public, establishing a great platform for me. This is my dream. People come to this country with big dreams of success but it is not that easy. You have to work very hard, be tenacious and present yourself to the public well.”

Rajendra recently spent a month back in Nepal where he met with senior artists and art students delivering his Interaction program. During his presentation he explains how people can come to the United States but the transition is not easy and there is “no money tree.” He impresses upon the group his mantra of hard work, tenacity, and establishing “a good image.”

Ever humble about his art (“I hope I’m doing well”), he is extremely grateful to Falls Church Arts especially Barb Cram and Joe Wetzel, as well as the people of Falls Church who have accepted him and his art.  In fact he always insists on taking a photo with each person who buys his work.

Raj loves to paint outside whenever he can, but he also maintains a studio at Tom Gittens’ Art and Frame as one of the Jefferson Street Artists. He tries to paint at least two to three hours a day if he can. He now thinks of his art as his full-time work while his other job is just part-time.

He has just wrapped up an FCA class in Intermediate Watercolor at the Falls Church Community Center. Students there learn how to use color and how to make landscape paintings from one of the area’s best.

Perhaps one of his Nepali colleagues describes him best. In 2007 Madan Chitrakar wrote, “Rajendra’s ability to capture the mood and the environment of a given spot has remained his main forte. He is one of the very few in today’s generation of landscapists who is so adept in its treatment and fully aware of the transparent quality of the [water color] medium. In view of his continued dedication and confidence in the medium, a lot more excellent landscape works can be expected of him in the future.”