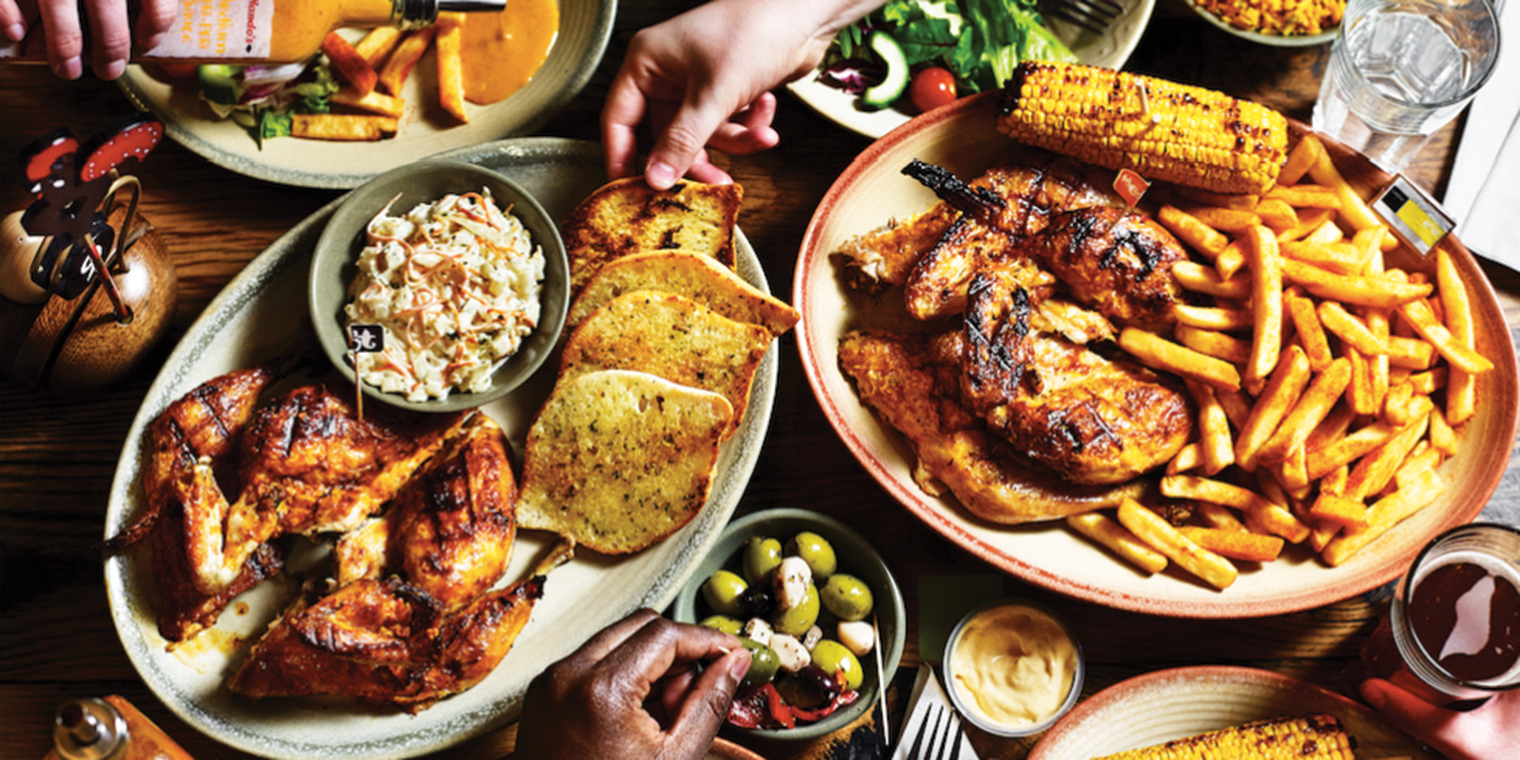 “Good food made by good people.” That’s how Colleen Lally, assistant principal of Falls Church High School describes Nandos Peri Peri in the Mosaic District. Her school partnered with the restaurant during the opening weekend in April 2016.

Consider yourself lucky that Nandos Peri Peri chose the Washington DC Area to open the country’s first Nandos restaurants, and they’re right here in our backyard. Because of our diverse, multicultural and well-traveled population, the iconic South African restaurant chain selected the DMV to establish another pack of Nandos fans.

Headquartered in the United Kingdom, Nandos Peri Peri is as ubiquitous in parts of Britain as Starbucks is here, explains Jason Louis, general manager at Nandos in the Mosaic District. Currently, Nandos has multiple locations in Northern Virginia, including Woodbridge, Falls Church, Old Town Alexandria, Ashburton, Falls Church, and most recently, Ballston.

Tucked back in the corner of the Mosaic District’s brilliant collection of shops and restaurants, Louis says that he frequently hears how his customers encountered Nandos during their travels and were thrilled to find one close to home. Nandos may be an international sensation, but when they open a new restaurant, the company develops and cultivates partnership within each community.

During Nandos debut in the Mosaic District, the restaurant donated all of its proceeds from Saturday and Sunday sales to Falls Church High School—a whopping $22,000 for the school. The students got behind the project and waved signs and shook pompoms to encourage visitors to dine at the restaurant. “We were blown away by their sincere generosity. It’s one of their true values—helping the community they’re in,” says Lally. Nandos has since become the community’s restaurant and has hired several students from the high school.

When the Ballston location opened, players from the Washington Capitals hockey team got behind the grill to cook and welcome diners. At their Woodley Park location, they had the DC United, Washington’s professional soccer team, grilling Nandos’ chicken. 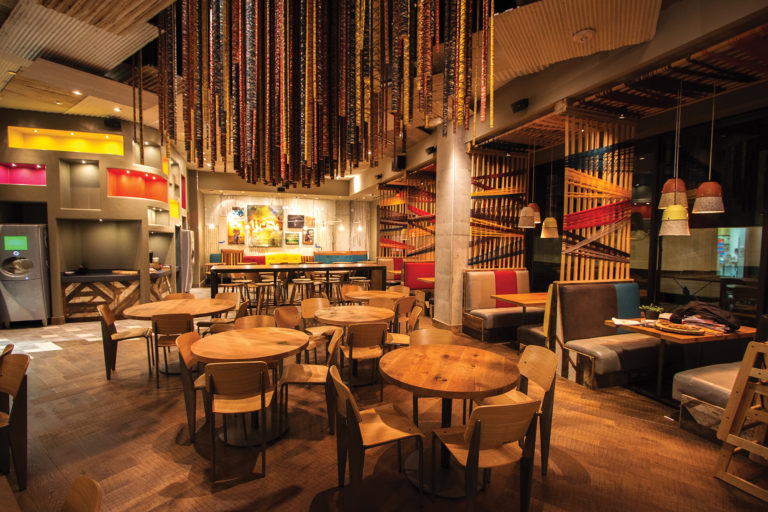 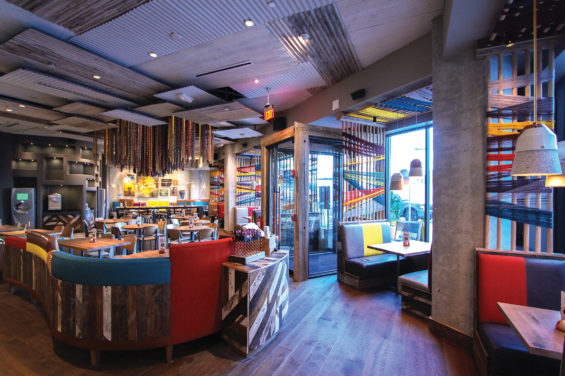 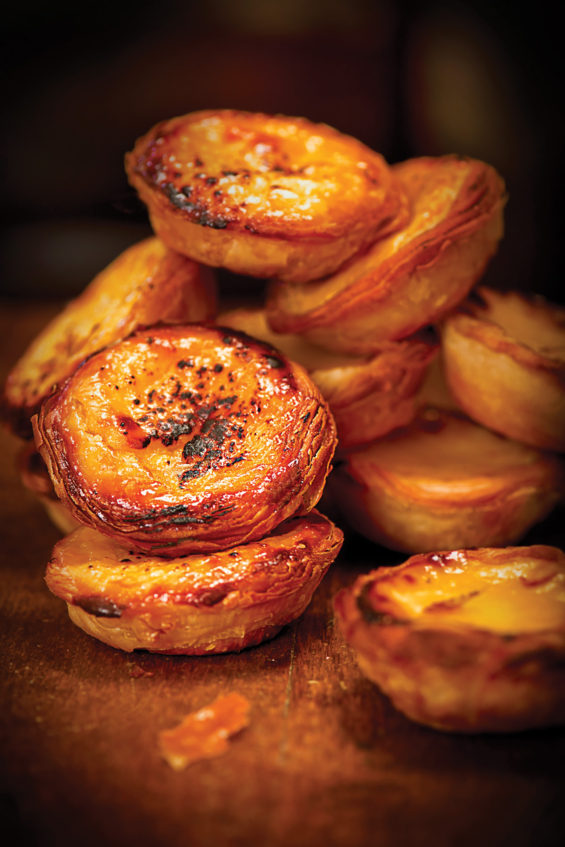 The interesting history of the restaurant goes back to two Portuguese friends from South Africa who opened up Chicken Land in 1987. Later, they adopted one of the owner’s names, Fernando, and opted to showcase what made their chicken so popular—the Birds Eye Chili pepper, known as Peri Peri (pronounced pity-pity), a spice that gives this chicken its gusto.

Nandos’ vice president of marketing, Sepanta Bagherpoura, explains the restaurant’s popularity, “The cuisine is not something made up in a boardroom or with focus groups; it is authentically southern African. It is an old world fusion of Portuguese and South African cooking.” Bagherpoura adds, “When the Portuguese settled in the southern part of Africa, the Swahilis introduced them to the peri peri.” The pepper became popular with Portuguese explorers, because it helped to preserve food and prevented scurvy among sailors traveling between continents. Bagherpoura notes that you’ll probably see chicken like this all over South Africa, Mozambique or Angola. “It is basically street food that’s incredibly tasty, vibrant and actually quite simple.”

The peri peri pepper is used in all of Nandos chicken marinades and sauces, but with different degrees of heat—mild, medium, hot and extra hot. Nandos only serves fresh, natural chickens that are marinated for 24 hours and then cooked to order on a flaming grill. The chicken is served with a variety of side dishes, from the creamy Macho Peas, to the roasted butternut squash, grilled corn and seasonal Brussels sprouts; so vegetarians have lots of choices here. The garlic bread and sandwiches are made on Portuguese rolls; the colorful rice has chunks of red peppers and herbs, and the red skin mashed potatoes are rich with garlic and cream.

Most of the menu items are quite healthful, and Nandos offers a robust selection of salads, including their new Quinoa Salad—roasted squash, avocado slices and cherry tomatoes tossed with black quinoa. The greens are lightly dressed with a tangy, honey sherry dressing and topped with crumbled goat cheese and roasted seeds.

At Nandos, you order at the counter, and then your food is delivered to your table. The menu items are reasonably priced for such high quality ingredients, attractive décor and dishware, as well as enthusiastic service. You can get in and out fast, or savor your dining experience by ordering the mango peach sangria and nibbling on some nuts and olives before you get to the main course.

Nandos Peri Peri restaurants are not all the same either. “Each of our restaurants is bespoke,” states Begherpoura. “They are adorned with South African contemporary art. In fact, Nandos is the largest buyer of southern African art in the world.” The restaurants all have their own artwork, fixtures, paintings and textiles. “So no two look the same,” says Louis. “Everything is different, but you know it’s Nandos.”