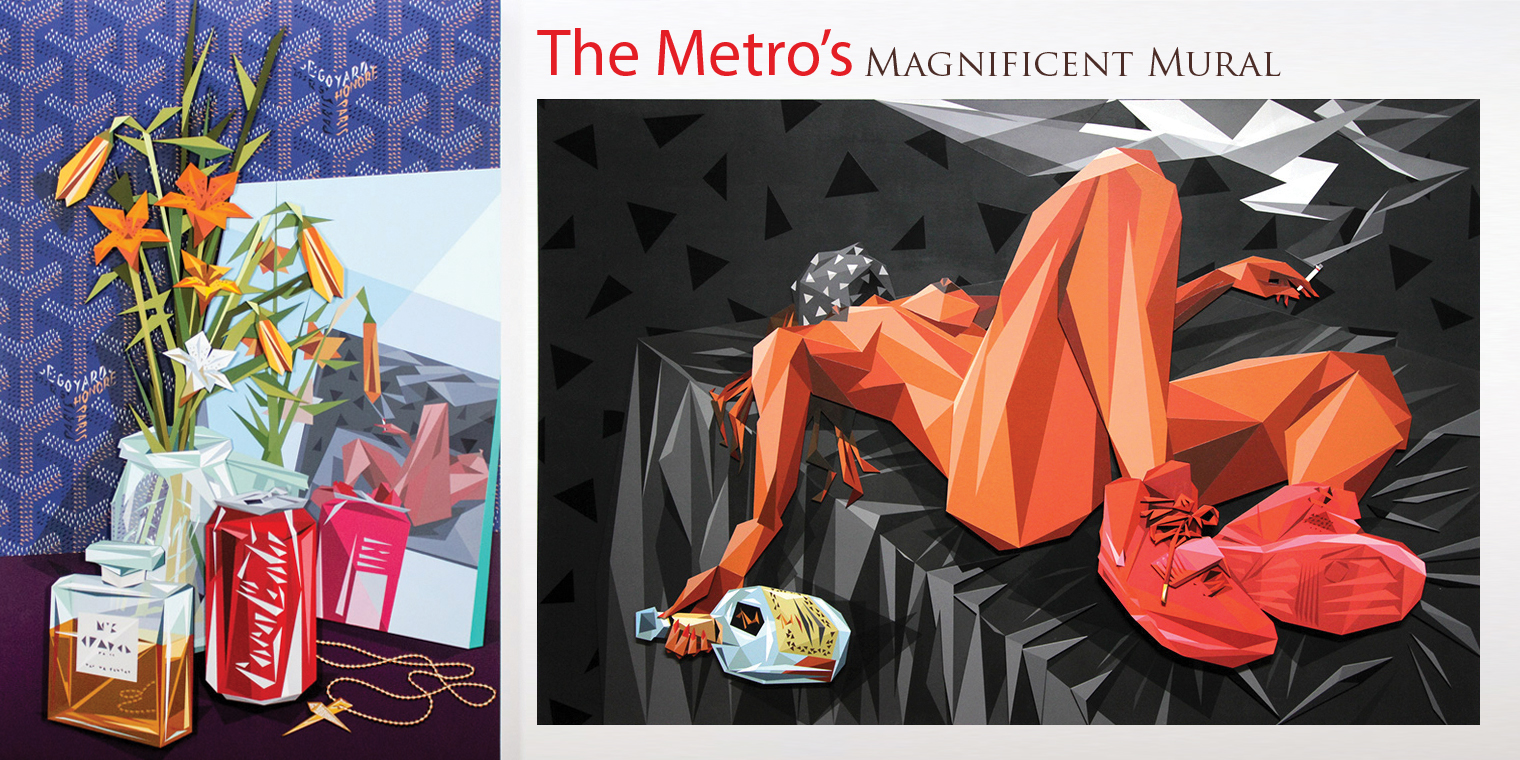 The internationally acclaimed Lawrence Atoigue, known as Naturel in the art community, has been working on a 20 foot by 78 foot mural that will be a focal point for the Silver Line Metro Station. And while snow has slowed him down a little, the project is expected to be complete by the time this issue goes to press.

Chances are, if you’ve walked past the Greensboro Metro Station in Tysons over the past couple of months, you’ve been privy to work by one of our area’s most noted artists—the internationally acclaimed Lawrence Atoigue, known as Naturel in the art community.

Since December, Naturel has been working on a 20 foot by 78 foot mural that will be a focal point for the Silver Line Metro Station. And while snow has slowed him down a little, the project is expected to be complete by the time this issue goes to press.

In the mural, through latex and spray paint, surrealistic water lilies will be rendered in a futuristic blend of pop and cubism.

Naturel Wild for the Night III 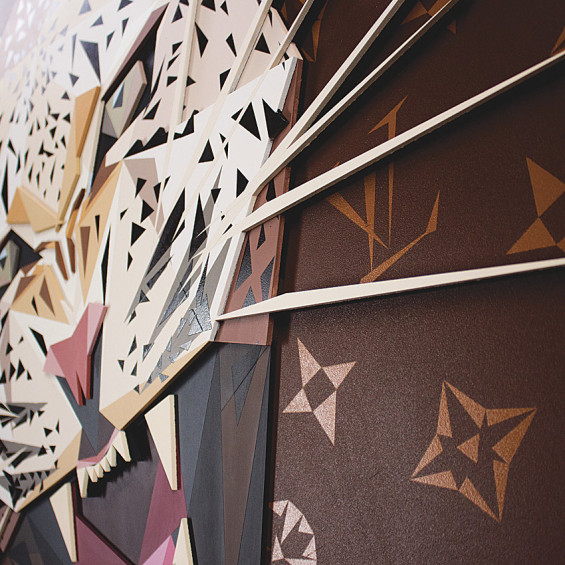 Naturel Wild for the Night III

During his career, Naturel has produced commercial art campaigns with Mountain Dew and Hpnotiq and has done work for everyone from LeBron James to Rihanna to Spike Lee. He’s exhibited in Miami and other cities, but this is his first large project in his hometown.

“I’m from the area, and it was a long journey for me to come and be able to leave my mark here,” Naturel says. “Primarily, D.C. was built on the tidal basin and the aquatic life around here is something that I wanted to capture, but also take a stab at Monet.”

The artist came to the project thanks to Shane Pomajambo, founder of Art Whino, a D.C.-based art gallery whose mission is to bring together the pioneers and freshest talent from around the world.

“I created the gallery to attract artists to an art scene that’s typically found in California and New York—very much pop surrealism and murals—and I’ve done numerous events over the last nine years, painting over 130 murals in the D.C. area,” Pomajambo says. “It just so happened, I had an opportunity in Fairfax County, and being a resident of Great Falls, I was very excited to be given the chance to do something in the area.”

When the Tysons Partnership was looking for someone to do a mural, they contacted Pomajambo.

“They told me they had this big white wall and a big blank wall in the Metro Station, and of course, people when they get off a Metro, would rather see a piece of art,” he says. “You don’t normally see a space that large for a mural. I work with a number of national and international artists and as luck would have it, a friend introduced me to Naturel.”

Because of his work in New York, Pomajambo didn’t realize that Naturel was based in D.C., but once he found out he lived in Virginia, he reached out to him about this great project.

Once they connected, Naturel was excited about the possibility and the two discussed what the best design would be.

“I was at the gallery with Shane and he was asking me what I wanted to do, and I told him there’s a common theme I like to go back to when I have the creativity and freedom to do something, and it’s always been these water lilies,” Naturel says. “I wanted to do something that was equally beautiful and simple for people to get, but also technical. The water lily theme to me, combines all of that.”

That was just what Pomajambo had in mind. 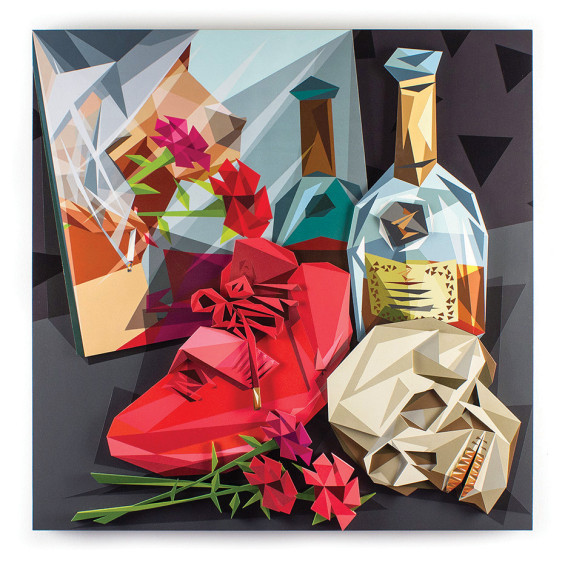 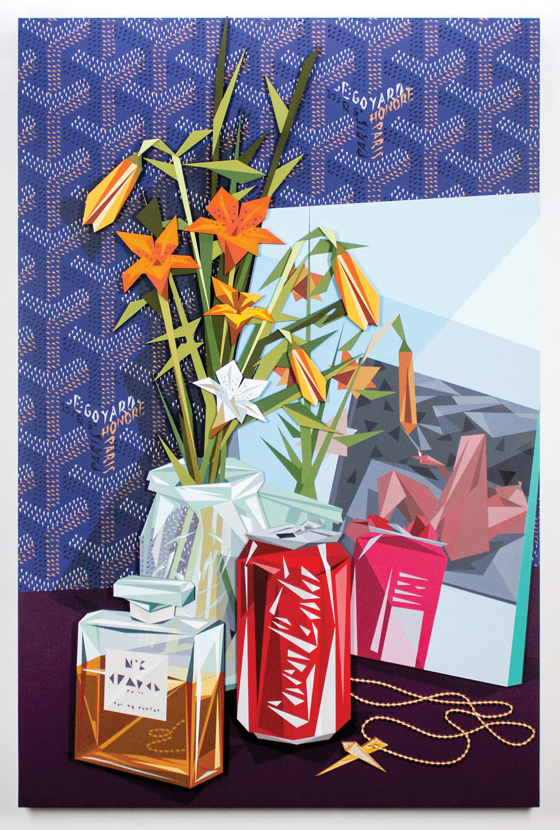 Naturel Bloom in a Dark Room

“When you do art like this for the people, it’s extremely important to do something that’s far reaching. You don’t want two ninjas fighting it out on a wall,” Pomajambo says. “He does a lot more abstract work and I thought that was quite important for this project. His geometrical style is definitely more broad-reaching.”

Pomajambo notes that in the D.C. area, this is a unique project because there’s not much of a mural pop-art scene, and even less of one in Fairfax County.

“I’m hoping this will be the beginning of more people seeing how cool it is, and then we’ll have a whole bunch of art in the Tysons Corner community,” he says. “I want to be able to bring a lot of attention and hype to the art community, which I think is important.”

Naturel will also have an exhibit at the Art Whino Gallery in April and has other things in the works in the District in 2016. For more information on the artist, visit allburgundy.com. For information on the gallery, visit www.artwhino.com.