The ever-changing sprawl that is Tysons is unique in its current condition, as it’s caught mid-evolution. In the past 30 years, Tysons has gone from rustic farmland to pressing against the outer limits of suburbia. So what sort of landscape will Tysons become in the next 30 years? Area artist, painter Bill Firestone, has some ideas about what Tysons’ urban fingerprint will look like.

In a piece commissioned by Terence Miller, president of the development company M.J. Wells and Associates, Firestone illustrates “Future Tysons,” featuring a prominent skyline and distinctive features of the area such as the Silver Line’s elevated tracks.

“City-scenes are what I’m more known for. My street scenes are more unique to me. I usually try to do them when it’s raining, so you get that glistening, misty feel.” For this artist, it all starts with a photograph and inspiration. He’s gone to places such as New York, Paris, London, Chicago, Washington, DC. “Those types of cities I patrol around, take pictures, then go back to my studio and see what interests me.” 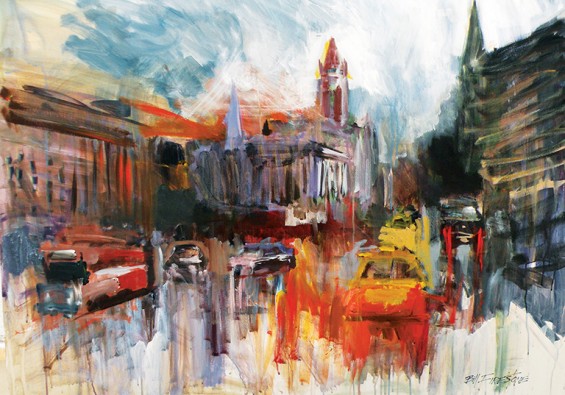 With an appealing impressionist style, Firestone’s art is colorful and loose while still evoking a powerful image of his subject matter. His work most often depicts various cityscapes, but also features machinery such as tractors and construction equipment as well.

“It looks like its done quickly, but really it isn’t,” Firestone explains, adding that the typical commission takes about six weeks for him to complete. “Before the client forgets you and that they hired you, you want to get it out.”

The sizes of the pieces vary, from 8-by-10 inches to a 6-foot by 8-foot piece. But his work wasn’t always meant to hang on a wall – for a while, he worked in print.

“I used to be an illustrator for magazines, and they had tight deadlines – sometimes overnight,” Firestone says. “I worked in oil, and it wouldn’t dry. So I switched to acrylics to accommodate the deadlines, and never went back.” 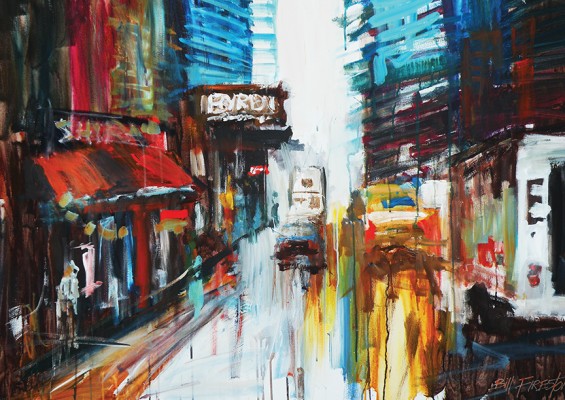 While he was an illustrator, he always painted on the side. Now, with painting as his primary occupation, his cityscapes are popular in many galleries in several states. They’re created in the unique studio space of the Workhouse Arts Center, located in the historic setting of the former DC prison in Lorton, VA.

Firestone’s artistic influences come not only from famous painters, but also from his fellow artists that he’s met through the workhouse. “That kind of working at it every day,” he says about his peers, “that’s something I strive to do.”

Lately Firestone has experimented with mixing aspects of different cities together to create a seamless medley of skylines. “It’s a compilation of cities – like Richmond has the monuments and the water towers, and Chicago has its bridges,” he says. “And I’ll put all that in a painting.”

The most challenging thing about his work, according to Firestone, is not knowing when a piece is complete. “How far to take a piece, how detailed to make it, how do you know when you’re finished – that’s what’s key.” Working at the studio at the Workhouse Arts Center allows him to show his pieces to other artists and get feedback, but it isn’t always enough to decide if a piece is truly done. “Not knowing how much to put in, how much to leave out – that’s the most challenging part.”

While working, Firestone blares rock ‘n’ roll music to fall into the groove of painting, mixing loud music with loud colors. As he says: “I have to let the accidents happen.”