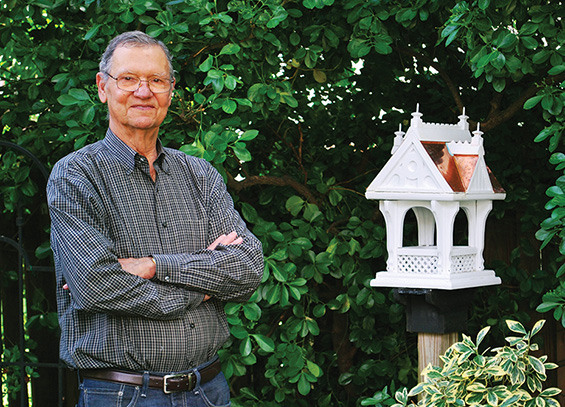 I first saw his work at The Artful Gift Shop in Vienna.  Peggy James always has some great stuff from local artists and we love to browse through the treasures and hear the stories of the artists who showcase their products there.  A collection of birdhouses caught our attention and we wanted to know more about the artist behind them. Enter Howard Lewis.

As a retired telecommunications industry engineer and avid sports fan, he took his love of sports and combined it with his woodworking skills and began constructing various motifs for his garden and home such as gazebo birdfeeders, arched gates, and themed birdhouses.

Before he got into the specialty of themed sports birdhouses, Howard was a volunteer artisan for the White House creating Christmas decorations during the Bush administration.

The first year’s theme was children’s literature and he built the bridge that the troll lived under in Three Billy Goats Gruff.  The following year, he built Santa’s home in the North Pole, and finally he created a national monument, the Treasury Building in New York City. That piece was placed on the mantelpiece beneath the portrait of First Lady Barbara Bush. He also made a replica of the Antioch Church on Beulah Road, which has been admired by the members of that church.

Since embarking on crafting sport-themed birdhouses, he estimates he has shipped out over 60 of them and they reside in three continents already:  North America, South America, and Africa.

He makes each one by hand, assembles it, paints it by hand with the team colors, and creates the individualized sports-themed birdhouse with a picture of your favorite athletic hero inside.  These are not for outdoor use but to place on display on a bookcase so sports enthusiasts can showcase their favorite team.

Howard Lewis is a man who refuses to slow down. He is also passionate about his collection of over 2,500 movies of his favorite old actors and actresses—including the complete set of Best Pictures Since 1927.

Howard is masterful in all puzzles and games, and has an acute sense of humor. His “retirement” an example of how one can fulfill their passions and be filled with a sense of accomplishment and purpose each day.

Howard Lewis can be contacted at Howardlewis1@cox.net