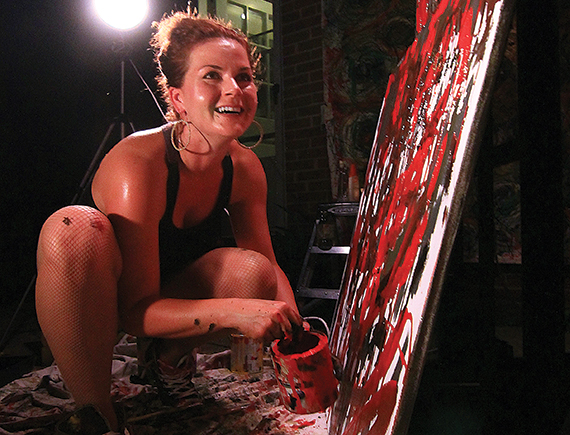 Dance to the Music & Art

Some artists listen to music while they paint to keep their heads clear, but for McLean’s own Christine Walters, music isn’t just an inspiration, but a part of her artistic process.

Walters is a performance artist who paints while listening to live DJ music, and her work derives from the beats and rhythms she hears. Be it in an abandoned warehouse, storefront, or even in her own backyard, the artist creates a party atmosphere when painting and dancing to the music becoming part of the art through photographs.

“There’s a lot of different types of performance artists and my specialty is I paint the abstract of live DJ music,” she says.

Although she’s called herself an artist from the time she was very young, Walters wasn’t trained in any sort of medium other than watercolors due to a family art connection.

“My aunt owned an art studio, my dad and grandmother were artists, so are lots of my uncles and aunts,” Walters says. “I also have a big musician background. My grandfather used to write back in the depression and played big band and was a singer. My uncle and brother are also involved in music. So, I grew up around a lot of this stuff.”

Born in Indiana and raised in Alabama, Walters moved to New York City when she was 18 and it was there she was first exposed to the live DJ sound. It was also about this time that she decided she wanted to make art a bigger part of her life.

“A couple of years ago I decided that instead of using pencils and pastels and all that stuff, which is kind of boring, I wanted to explore this thing that all happened to me when I listened to music,” she says. “Music has always had colors and shapes to me. Where some people can just sit and listen to music and fall asleep, it energizes me and makes me want to get up and do something creative.”

When painting Live DJ music, Walters prefers using materials that are fluid and contrast, since DJs themselves are fluid and change bass lines, tempos, emotion, and even genres on the fly. Her process is an interesting one to watch. If you watch a painting from start to finish you can see how it starts in one place then has a totally unexpected ending.

Some of the wide variety of music she listens to while painting includes The Cure, Crystal Castles, RadioHead, CocoRosie, Beauty Pill, Snoop Dog and Lil Wayne.

“Since I started bringing music and painting together, I have experimented with different types of genres—hip hop, alternative, drum and bass, dubstep—and they all have their own particular uniqueness,” she says. “When people see all of my work, everything looks different because I am constantly changing the music.”

Last year, Walters did her first performance piece with her regular spinner (DJ Cosmo Lubertazzo) and she would have 10 to15 people come over to her house every few weeks so they could dance and enjoy the music while she did a new performance art piece.

“It is all done outside and it’s quite the scene for McLean, and the cops even called on us a few times,” she says. “I like having people around who are doing lots of dancing. In the winter, I would live stream my stuff because it was hard to get people to come out.”

For one of her favorite pieces, Walters pulled up to a parking lot and looped three songs that she really liked to play while she painted. Each painting takes about three to four hours and she uses oil and water-based spray paint to give a uniqueness and reflect what the DJ was feeling at the time.

“Every DJ has their own sound and it can be very angry or very dance and happy and every difference makes differences in my work. Sometimes I may hear someone say that they really like something, but when the music changes, I may go somewhere completely different with it,” she says. “In the winter I needed to search for different types of music to paint, and one of my favorite groups was Crystal Castles because their music was so bright and blue. I have some really cool paintings from listening to them.”

Walters is currently looking to find some other DJs to work with and says she doesn’t really ever want to work with live bands again because they stop so much and it interrupts her creative flow.

Unlike a lot of artists who seek out opportunities to display their work in galleries, Walters is busy with a full-time job and two kids, and says that she’d rather spend time doing the art than looking for a place to display it.

“I’d rather have an art gallery come to me instead of me knocking on every door,” she says. “I’ve sold about 10 to 15 pieces, all mainly by word of mouth. I set up my art for display in my front yard and people come by and have bought it.”

She does submit her work to some shows and has performance pieces planned for the months ahead in D.C., Italy, and New York.

“For me, art is an expression, and I don’t really think about what I want in terms of people looking back at my art other than to know I had a really good time doing it,” she says. “Whatever happens with it in the future, if people admire it or sell it for a lot of money or bring it to the landfill, it’s just important that I enjoy it.”

For more on the artist, visit www.christinewalterstheartist.com.