Getting to Know Here Come the Mummies

At first look, one might be a little skeptical of the musical prowess of the members of Here Come the Mummies, as those in the band come out on stage looking as if they are right out of a tomb.

And though they claim to be 5,000-year-old Egyptian Mummies, the eight-piece funk-rock band is rumored to be comprised of noteworthy Nashville-based studio musicians, some of whom may even have some Grammys to their names.

Whatever the truth, the band’s mysterious personas, cunning song-craft and unrelenting live show is one not to be mixed.

For more than two decades, Here Come the Mummies has toured around the country, opening for everyone from P-Funk to Al Green to Cheap Trick and even rocked the Super Bowl Village. 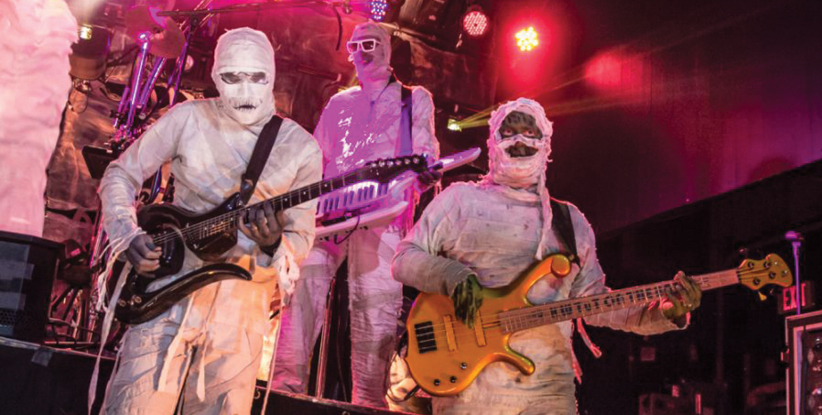 Here Come the Mummies will play the Birchmere on June 1. As they got ready for their 2018 tour, bandmates Mummy Cass and Midnight took some time to “wrap” with Viva Tysons about their mysterious careers.

VivaTysons: What can those coming to the Birchmere expect from your performance when you visit?

VivaTysons: Your group is known for its live show—the fun, the uniqueness—how important is it to you to create an “experience” for the audience?

Mummy Cass: It’s way up there, naturally—and we put a lot into it. Musically, and technically. We want to make sure we burn down your inhibitions like an old casino, and make your clothes fall off.

Midnight: That takes work. Lucky for you, we enjoy it.

VivaTysons: The band claims it’s comprised of mummies around 5,000 years old. What are the biggest lessons you’ve learned in the music industry during that time?

Mummy Cass: If you want something done right, you have to do it yourself. It is going to be hard… and totally worth it.

Midnight: I was just sayin’ the same thing, on a separate topic.

VivaTysons: How do you keep your sound fresh?

Mummy Cass: We just always follow our instincts, no matter where they lead us. Experimentation is the “gin in the vermouth,” as somebody said.

Midnight: : Sometimes you gotta scrub it with a wire brush, though.

VivaTysons: What is the appeal of mummies? Why is this something that audiences respond to?

Mummy Cass: Because people are using their imaginations. Since you don’t know too much about who and what we are, it’s easy to project your wildest fantasies onto us.

Midnight: And we thank you.

VivaTysons: Layered beneath the wrapping, it’s rumored that there are some Grammy Award winners as part of the band. Can you confirm?

Mummy Cass: Nope. But the rumor isn’t without truth.

Midnight: I don’t want to avoid knowing what you mean, Cass.

VivaTysons: Here Come the Mummies has been going strong, playing live for almost 20 years. Are you still with the original players? How much turnover is there in the group?

Mummy Cass: And that is just in this modern era. Well, you’ve always had your Eddie Mummy, your Mummy Cass (that’s me), your K.W. TuT, your Spaz on keys… there’s Midnight, he’s been around forever, too. Ra comes around from time to time, and “The Flu.” Mummy Yo shows up now and again, and then there is a pretty new guy, unearthed in another part of Tunisia, who plays trumpet. We call him the High Priest of Death. HPOD for short. Oh yeah, and “The Pole,” on a whole lottta bass.

Midnight: And there’s this guy Midnight, too. He plays everything. Talk box, keys, percussion, vocals. It’s pretty obvious who’s up there workin’ the hardest.

VivaTysons: For those coming out who aren’t aware who you are, how can you prepare them for what’s about to come out on stage?

Mummy Cass: Just know that you are gonna have a hard time taking it all in, but it is gonna be fun to try. Sort of like having 36 hours shore leave in Tangier.

VivaTysons: Kiss is infamous for decades of never being seen in public without make-up, but eventually gave in to the public demand. What would it take for you to unwrap and reveal yourselves?

Mummy Cass: Baby, if you tried to take off our fetid wraps, the human-jerky underneath would peel right off, too. Nobody wants to see a bunch of dusty skeletons just laying there.

Midnight: Except for a few weirdos.

VivaTysons: What else would you like people to know about you? Any projects coming up in 2018?

Mummy Cass: We are making a live album of entirely new songs. We are working them into the set two at a time, like some bizarre Noah’s Ark of funk, gettin’ good at playin’ ‘em, and recording it all.

Midnight: We’ll release the pick of the litter later this year. We want to hear Y-O-U screaming along.