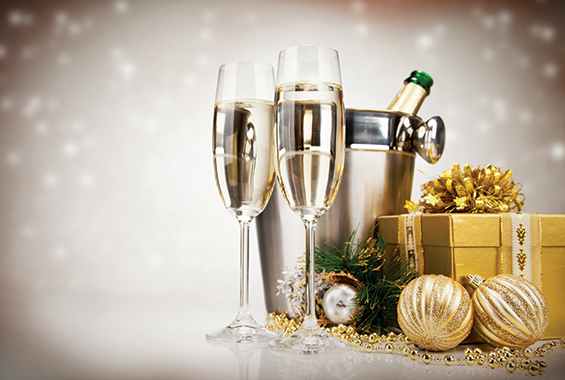 Treat Yourself to a Little Bubbly from Virginia

With the holidays approaching quickly, it is time to “break out the bubbly”…Virginia sparkling wines, that is. Very much like Champagne, Virginia’s products are called sparkling wines because only those produced in the Champagne region of France are entitled to the name “Champagne” under the rules of the appellation, a legally-defined and protected geographical indication used to identify where the wine grapes were grown.

Of the approximately 254 wineries in Virginia, only about 18 produce a sparkling wine (as listed by the Virginia Wine Board), with some wineries producing more than one selection.

Why aren’t more Virginia wineries making sparkling wines? According to Annette Boyd, director of the Virginia Wine Board Marketing Office, “Sparkling wine is time and labor intensive. It involves fermenting twice and it takes special equipment to do it. You need to be committed to the process to invest the time and money to produce a sparkling wine.”

This double fermentation process is known as the “Méthode Champenoise,” which creates the bubbles found in sparkling wines and Champagne. Bringing to this region generations of tradition from the Champagne Region of France, Virginia’s sparkling wines capture the flavors and essence of the Virginia terroir and deserve a taste.

Virginia’s climate is good for sparkling winemaking, said Isabelle Truchon, branding consultant and Greenhill Winery & Vineyards in Middleburg (and wife to winemaker Sebastien Marquet).  She explained that because of our climate challenges, sometimes the grapes don’t get to ripen as fully as the winemakers would like because of wetness, mold, lack of heat, brightness, etc. “For producing a sparkling wine, we usually pick [our grapes] earlier because we want a high acidity level in the wine,” she explains. By picking earlier, the brix level (percentage of sugar) in the wine is higher and this creates a more crisp, beautiful sparkling wine.”

At Greenhill, their Blanc de Blancs sparkling wine is made with 100% Chardonnay grapes, produced in the traditional Méthode Champenoise. It is fermented in stainless steel, and aged for 22 months in barrels before undergoing its second fermentation in the bottle.

“It was important for us to have a sparkling wine because we brand ourselves as elegant, upper scale and traditional. It made sense,” Truchon said. Their Blanc de Blancs’ wine profile is in the European-style of elegant, complex wines and has performed well in national competitions, winning the San Francisco Gold Medal in 2014, and in the San Diego Winemaker’s Challenge, taking the Best of Show and Class awards.

Sparkling wine can be made from several types of grapes, the normal choices being Chardonnay, Pinot Noir and Pinot Meunier. It can be produced with just one type of grape, or from a blend of all three. Fermenting with just the juice of the grape and not the skins allows it to maintain its light color.

The Trump Winery in Charlottesville prides itself in making quality wines from their estate-grown fruit in the heart of the Monticello AVA. Their sparkling vineyards are planted in Chardonnay, Pinot Noir and Pinot Meunier in sites chosen for their cooler terroir that help preserve the natural acidity and minerality needed to make a truly great sparkling wine.

“All four sparklings are unique to each other, with a different flavor profile and different food pairings,” said Kerry Woolard, General Manager. “Some, like our Sparkling Reserve, are as complex or more complex than the biggest, heaviest reds.” The wines are produced by winemaker Jonathan Wheeler, who has been with the property since 2006.

“For us it’s a labor of love and a time-intensive project,” Woolard explained. “The vineyards we use for sparkling wines were planted to be sparkling wines. The clones are Dijon clones specifically chosen for the sparkling program and are found in the low-lying area of the property where they get the cool, sometimes foggy, mornings and slower ripening.”

“We see growth in the popularity of sparkling wines. Take the popularity of Prosecco, for example,” Woolard said. “Great sparkling wines are made around the world, and Virginia is no exception.” The Trump sparklings have been rated among the Top 10 American Sparkling Wines, its Blanc de Noir has placed in the Top 20 in the Global Wine List, and its Sparkling Reserve was the first Virginia wine to receive a 91-point score by Wine Enthusiast.

French winemaker Claude Thibaut has been called a “master of Méthode Champenoise.” He moved to Charlottesville in 2003, joining a local winery as a consultant to spearhead the creation of a sparkling wine, then in 2005, began his own label in partnership with Manuel Janisson, producer of the Champagne Janisson & Fils. Their first vintage was released in November 2007 under the brand: Thibaut-Janisson. Their sparkling wines include the popular Blanc de Chardonnay and a creamy Virginia FIZZ, and can be found in retailers throughout the Commonwealth.

Toast to the Season

This holiday season, don’t reach for the usual Champagne. Try a little bubbly from Virginia instead. The Greenhill Blanc de Blancs, the Trump Blanc de Blanc, and the Thibaut-Janisson Blanc de Chardonnay are perfect for toasting…or everyday enjoyment.