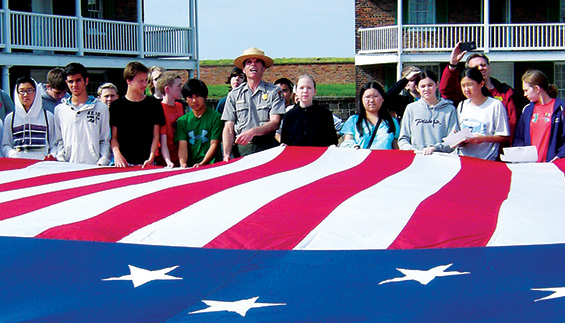 Long May She Wave

Celebrating 200 years of the Star-Spangled Banner

If you thought Betsy Ross was the maker of the Star-Spangled Banner you would be wrong, but it would be a great place to start learning about the history of our American symbol that turns 200 years old in 2014.

For three years, the United States was embroiled in the War of 1812 throughout the Chesapeake Bay region of Maryland, Virginia, and the District of Columbia. It was a war that tested our young nation and in 1814 produced two of our most iconic patriotic symbols: The Star-Spangled Banner that flew in defiance of the British, and the national anthem that honors it.

A great way to explore the flag’s history is through the Star-Spangled Banner National Historic Trail, administered by the National Park Service.

Start your tour in Baltimore at the Star-Spangled Banner Flag House and museum. Built in 1793 and bought by the City of Baltimore in 1927, this is the house where Mary Pickersgill—the true maker of the famous flag—lived.  As the story goes, when Major George Armistead was seeking a large national flag for the nearby Fort McHenry, he came to Pickersgill, an experienced flagmaker. She accepted the commission at a fee of $405.90 (similar to $8,500 today) and she, her mother, daughter, nieces, and servants worked on the project for seven weeks.

The flag was so large that it outgrew the house and had to be completed in the loft of a nearby brewery. When finished, it was 30 feet high and 42 feet wide. On the outside of the museum building, visitors see a life-sized depiction of the flag. Tour the museum for period artifacts and a thorough history.

The Battle of Baltimore

A few weeks after withdrawing from Washington D.C., the British set their sights on Baltimore, and attacked on September 12, 1814. Armistead, the Fort’s commander had prepared his men for the fight and through a day and night of stormy weather, the British pounded the fort with rockets, mortars, and cannons. The British expected a quick surrender.

Prior to the battle, American lawyer Francis Scott Key had taken a ship out to the British ships to negotiate the freedom of an American doctor, and was held there throughout the attack. In the morning, it was not clear who had won. Key strained his eyes to see which flag flew over Fort McHenry, and on the morning of September 14, it was the large American flag that was raised.

Key was so inspired by this sight that he, already a poet, quickly penned notes for the song that later became our national anthem. Visitors can view the rarely-exhibited original manuscript this summer at the Maryland Historical Society.

Take a narrated boat tour to see where the battle took place in the harbor, and visit Fort McHenry with its original buildings and fortifications. Arrive at 9:30 a.m. to help raise that day’s flag (the flag size depends on the weather conditions) and be sure to watch the inspiring film in the visitor’s center.

After the war, the Star-Spangled Banner flag was kept in the Armistead family and housed in a large canvas bag. It was brought out for patriotic occasions, and displayed for the Baltimore sesquicentennial celebration in 1880. Along the way, people snipped small pieces, and even a star from the flag as keepsakes. Fearing for the flag’s deteriorating condition, Eben Appleton, one of Armistead’s descendants, stored the flag in a New York safe-deposit vault. In 1907, he lent the flag to the Smithsonian Institution, and in 1912, converted the loan to a gift.

Nothing is more awe-inspiring than viewing the actual Star-Spangled Banner, now on permanent display at the Smithsonian’s Museum of American History. For years it hung in the main hall, then in 1994, underwent an extensive conservation. It now rests in a climate- and fire-controlled two-story display chamber. Be sure to play on the tactile, interactive flag display table where the flag’s story is told through lighting, ambient sound, and video.

For additional destinations highlighting the War of 1812, visit Maryland’s best-preserved battlefield at the Battle of Caulk’s Field site, near Leonardstown.  Catch the bicentennial battle reenactment the weekend of August 30-31 for an authentic feel of the war.

Spend a day at the Jefferson Patterson Park and Museum in St. Leonard and view archaeological finds or watch a dig in process (sign up in advance to help dig).  All of Maryland’s artifacts are held here including those from the War of 1812.

Look for flag-related celebrations going on throughout Maryland, Washington D.C., and Virginia. And the next time you see our symbol of freedom, take a moment to remember what it meant to the people of Baltimore, who watched the battle from their rooftops in 1814, and what it means to us today.