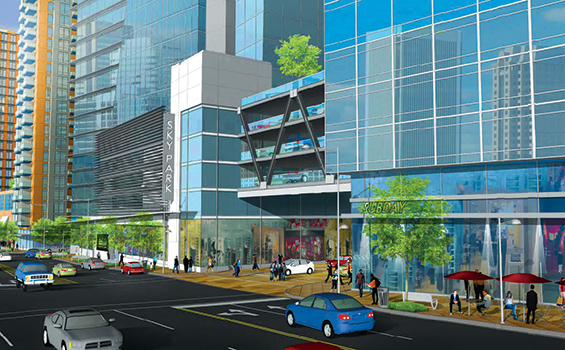 Dominion Square to Transform Dealerships to Mixed Use

In mid-2011 a grouping of car dealerships along the south side of Route 7 in Tysons formed CARS, a development arm which looks to convert what is currently several acres of parking lots into a mixed use, high density project. The largest individual component of their plans, split into individual rezonings based on current subdivision, is Dominion Square.

With 12 total buildings, ranging from 150 to 400’, Dominion Square represents as much as 4.7 million sq. ft. of potential development, and could mean 2800 more residential units coming onto the market, all within a quarter mile of the Spring Hill metro station.

The project also proposes reducing surface parking in order to fit a new athletic field which, along with a new children’s play area, will expand the adjacent Raglan Park open space. This is in stark contrast to another project’s propose plans to use part of the same park area along the Vienna boundary for athletic fields, reducing screening and natural preservation.

Dominion Square also provides some functional improvements to people and vehicle flow by providing the necessary right of way to extend Boone Boulevard, and to provide two additional parallel roads Roseline Street, and Dominion Street. Each of these will come at cost to the developer inline with the County’s Comprehensive Plan for a grid of streets. It will not only provide alternatives to the use of Route 7 for local access,
but also create a more walkable connection for future Tysons, and
current Vienna, residents.

All of the plans come with zero resident relocations. All that is occurring with the Dominion Square plan is a smarter way of doing things. Instead of wasting acre after acre for surface parking lots, which makes each parcel an island in a sea of asphalt, they are rearranging the blocks to use structural parking make up the deficit.

Yes, the project proposes significant density, but all of that is within walking distance to metro, and a majority of it is residential. Those residential units are, and will be, marketed to prospective residents who want a car-light, or even car-free life. In other words, all density is not created equally. 1000 sq. ft. of development in a non-transit accessible suburban area creates more vehicle generation than 1000 sq. ft. of development within a transit
accessible urban area.

On top of the fewer trips, by being closer to jobs, the average VMT
(vehicle miles traveled) is also drastically reduced when compared to traditional suburban development.

Dominion Square is a win-win concept for everyone involved, millions of dollars of tax revenue for Fairfax County, minimal infrastructure costs, new park space which provides screening and amenities to existing neighborhoods, and significant commercial improvements for the land owners.

It’s yet to be seen if Dominion Square’s viability has influenced other strip mall owners on the South side of Route 7 to reconsider the future of their properties. v

All images from Dominion Square RZ-2011-HM-012 by DBI, LLC and architect WDG Architecture