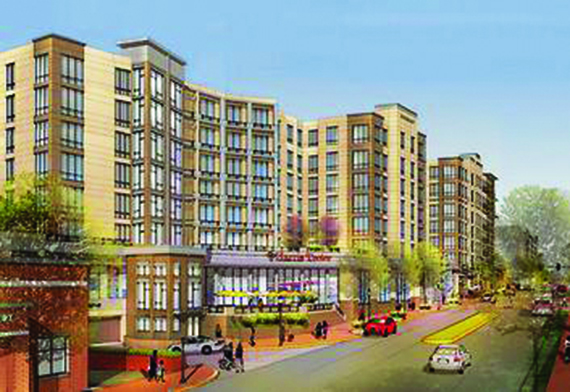 “Our Little City is Getting Larger,” said Lindy Hockenberry, City of Falls Church Planning Commissioner, about the Mixed-use Development coming to the Falls Church City Center at 301 West Broad Street.

“I am pleased to work with Rushmore [Properties] – it was a very wonderful process to work with them,” said Hockenberry.

Hockenberry was one of many guests who attended the Falls Church Chamber of Commerce luncheon at The Italian Café in January. Presenting an update on the development were Stefan K. Gassner, Development Manager and Peter Kearney, president, both from Rushmark Properties.

“We are thrilled to get started with this project,” said Kearney. “We were concerned at first that there would be opposition to a large mixed-use development.”

Demolition of the existing post office is scheduled for early March with a Ground Breaking Ceremony in late March. They hope to begin leasing apartments in the summer of 2015 with the first move-in occurring in fall of 2015.

Gassner spoke about the buffer plan, which will consist of evergreen trees around the back of the building. There will be a pedestrian walkway and residents of Winter Hill will have access to Broad Street through one of the buildings.

Interestingly, Gassner said that ‘pets are encouraged.’ Studies show that people with pets are less likely to move out.

301 West Broad will be LEED certified, certification to be determined. An additional 3,470 square feet of ancillary retail will also be available.

There were several questions from the audience. Bob Hull, Annandale Campus and Community Outreach Specialist for NOVA, asked if the bus stop would remain and the answer was yes.

Somebody asked if they would resume the shuttle bus that used to run from Falls Church Center to the Metro and Kearney said he wasn’t sure. A question was asked if the Burke & Herbert bank would be part of the development and Gassner said that it is a stand-alone building and will stay as such for now. Other questions focused on the tax rate.