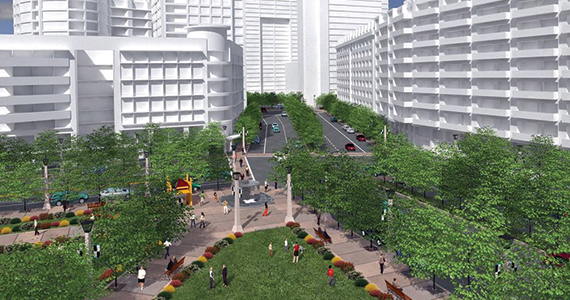 The Tysons skyline at its core will take on its planned urban look following Fairfax County’s approval of a mixed use development at the area’s highest natural point.

From this spot, new high-rise buildings ranging up to 400 feet—or 36 stories—will be visible across the emerging urban center and beyond. Today, one and two-story shops, parking lots and Clyde’s restaurant populate the 5.7-acre site next to the Greensboro Metro station.

At its Nov. 19 meeting, the Fairfax County Board of Supervisors approved NV Commercial and Clyde’s Real Estate Group’s plan to build up to 2 million square feet. Called Tysons Central, the project offers two different development options for the site—one with more office space and another with more housing.

“The Tysons Central redevelopment project is an excellent model for what the board is trying to achieve in Tysons,” Fairfax County Board of Supervisors Chairman Sharon Bulova said. “I’m particularly excited about the potential for pop-up uses around the station, making Tysons a destination while development progresses. This development is a great example of the kind of mixed-use project that will move Tysons closer to becoming the urban downtown the board envisioned when it created the Tysons Comprehensive Plan three years ago.” Whatever option is picked, the project will put up six new buildings as market conditions allow. The existing shops, parking lots and restaurant eventually will be razed to make way for the high rises. Until then, these businesses will remain, but NV and Clyde’s may convert some of the parking lots into commercial, off-street parking.

However, the developers will install temporary, pop-up retail on the plaza next to the Metro station. This may include food trucks or retail operating out of recycled shipping containers. They also will install benches, bike racks and landscaping on this plaza. Because there is no sidewalk from the station to the existing offices to the north and west,the two companies will build a five-foot wide pedestrian path within the next six months.

The entire development will sit on top of a shared, conjoined, underground parking garage, although above ground parking will be integrated into some buildings.

Except for 10,000 square feet, the entire development sits within one-eighth of a mile from the Metro station. The first building to be erected may be a 400-foot apartment with up to 414 units along Leesburg Pike, near the interchange with Chain Bridge Road. Along with the overall project, the board approved a final development plan for this high rise. It includes up to 17,000 square feet in ground floor retail, and the developers will install a temporary park around the building.

As with previously approved, new developments for Tysons, Tysons  Central incorporates features that will make the area a walkable, green, 24/7 urban center, including:

u Parks: Six new parks or plazas will be built, totaling up to 2.9-acres. These open spaces include a plaza at the Metro station landing, an adjacent skypark two levels up, a corner park along Leesburg Pike, a central piazza, Clyde’s Park and a pocket park. Recreation facilities are provided too, including two courts in the skypark and a playground, dog park, and five exercise fitness stations in Clyde’s Park. The developers also will contribute $2.38 per square foot in leu of building an athletic field, an amount equal to previously approved, new developments for Tysons.

u Public Facilities: Even though the county’s land use plan doesn’t require a public facility in this part of Tysons, NV and Clyde’s will offer up to 14,500 square feet in one of its buildings for community use. This space could be spread over two floors, and they will provide 5,400 square feet on the ground floor at no cost, as well as cover operating costs for 10 years.

u Affordable Housing: Tysons Central includes 20 percent affordable housing, and these units may be consolidated into one or more buildings, which would increase the amount beyond 20 percent in some buildings.

Tysons Central creates a cohesive neighborhood on a steep site. The site’s highest point—at 498 feet in elevation—sits near a U.S. Army telecommunications tower while the lowest point is at 465 feet at the Metro station. Because the highest, natural elevation in Tysons is in this area, the county’s land use plan calls for the tallest buildings to be located here, and Tysons Central will offer a varied, distinctive skyline for the county’s “downtown.”